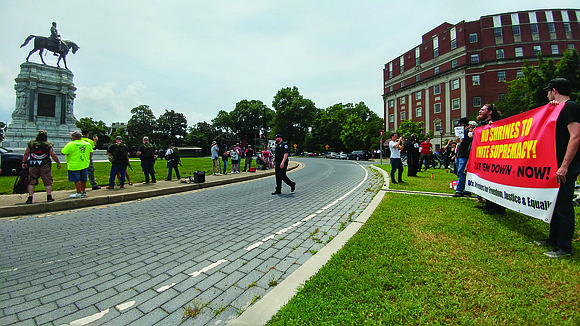 Neo-Confederates and counterprotesters face off on Monument Avenue at the statue of Confederate Robert E. Lee during competing rallies on June 1. George Copeland Jr./Richmond Free Press

More than two dozen people called on Gov. Ralph S. Northam to remove the statue of Confederate Robert E. Lee from Monument Avenue during a recent rally in Richmond.

The contingent, which included members of the Virginia Defenders for Freedom, Justice & Equality, held a protest June 1 to counter a band of about 25 neo-Confederates who staged their own rally in support of the Lee statue.

It was the sixth such rally organized around the Richmond statue by the Tennessee-based CSA II: The New Confederate States of America in the last two years.

The neo-Confederates and counterprotesters were separated by a lane of traffic and the presence of about 16 law enforcement officers from the Richmond Police Department and the Virginia Capitol Police, with both groups trying their best periodically to shout down the other.

The Virginia Defenders read an open letter they had sent to Gov. Northam requesting he take action.

“These statues do not represent history or even heritage,” stated the letter, which included the signatures of leaders of the Sacred Ground Historical Reclamation Project, Wesley Memorial United Methodist Church, the Virginia State NAACP Youth Division and the Virginia Defenders. “If you are truly serious about working toward racial justice in Virginia, you can take the simple step of declaring that you want the Lee statue taken down, and then take concrete action to make that happen.”

While the competing rallies were nonviolent and without any arrests, the mood between both groups was contentious and combative. Most of the neo-Confederates, which included the Virginia Task Force of Three Percenters, also known as the Dixie Defenders, were heavily armed, carrying military-style weapons and combat gear as cars and trolley tours navigated the busy traffic circle at Monument and Allen avenues.

Police eventually convinced both groups to leave the area around an hour after the rally’s start, a far cry from the nearly seven-hour rally just blocks away at the Jefferson Davis Monument last August.

“We’re just happy everybody can exercise their First Amendment rights,” Richmond Police Maj. John A. O’Kleasky Jr. said of the day’s events. “There was no violence, no arrests and now we can resume our normal business in the city and get back to it.”

Richmonder Rachel Robinson, who called herself a “friend of the Virginia Defenders,” expressed concern about the financial toll the repeated rallies have incurred for Richmond taxpayers. The first of these neo-Confederate rallies, held in September 2017 less than a month after the deadly violence in Charlottesville by white supremacists supporting that city’s public statues of Confederates, cost the City of Richmond more than $500,000 for police protection.

“This money should be going towards the schools,” Ms. Robinson said. “And all Richmond residents should be, regardless of what side they fall on, appalled that our tax dollars and our money is going towards this.”

When asked about the expense put on Richmond taxpayers, Jenna Bernstein, a Florida native supporting the neo-Confederates, blamed Mayor Levar M. Stoney and the Monument Avenue Commission he established to make recommendations about the Confederate monuments. Last summer, the commission recommended that the Jefferson Davis Monument be removed and signs be erected to provide context for the Lee statue and three others to Confederates.

While Gov. Northam voiced his opposition to the Lee statue during his gubernatorial campaign, he has been quiet on the matter since, despite recent actions against other Confederate memorials in the state.

In April, he requested that the Jefferson Davis Memorial arch be removed from Fort Monroe, site of part of the commemoration in August recognizing the 400th anniversary of the first Africans in Virginia. Gov. Northam’s support also was cited as one of the key factors behind the recent renaming of Jefferson Davis Highway in Arlington County to the Richmond Highway.

Richmond has yet to see similar advances, with Richmond City Council recently voting down an ordinance seeking city control of the monuments from the state government.

Ms. Robinson said progress is needed in Richmond on removing the statues.

“We’re hoping that Gov. Northam follows his promise that he is going to work against slavery and oppression,” she said.