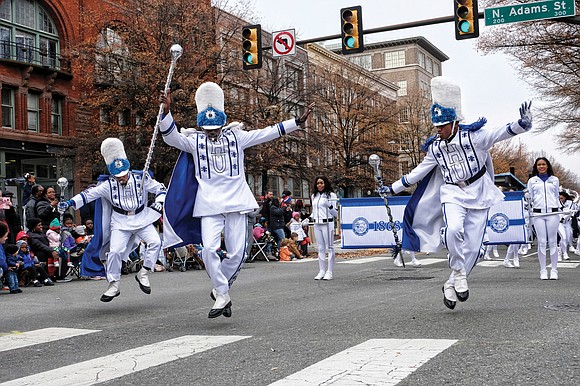 Forget the floats and the cartoon character balloons. The Hampton University Marching Force will perform in the 2020 Macy’s Thanksgiving Day Parade.

The surprise announcement was made Monday to an excited group of student band members on the waterfront campus.

The high-energy HU Marching Force, which performed in 2018 at the 16th Annual Honda Battle of the Bands before more than 62,000 fans in Mercedes-Benz Stadium in Atlanta and whose talented drumline marched in the 2019 Tournament of Roses Parade in Pasadena, Calif., is one of nine bands selected from hundreds of applicants to appear in the annual Macy’s Thanksgiving tradition in New York City.

The 2020 parade will be the 94th iconic holiday spectacle featuring floats, clowns, giant character balloons, superstar performers and, of course, Santa Claus, and drawing thousands of spectators along the 2-mile route and hundreds of thousands in a national television audience.

“This opportunity will allow Hampton University to once again shine on the worldwide stage in front of the millions in attendance and others watching from across the globe,” stated HU President William R. Harvey.

“Under the direction of Dr. Thomas Jones, The Marching Force continues to uphold the standard of excellence as being one of the best marching bands in the nation.”

“Rooted in tradition and with explosive energy, the Hampton University Marching Force delivers outstanding, entertaining shows that time and time again bring the crowd to their feet,” Mr. Whatley stated.

“We look forward to introducing the talented students of Hampton University to our parade audience for the band’s debut” in 2020 in the Macy’s parade.

Earlier this year, the band was invited to participate in the 2020 New Year’s Day Parade in Rome.

“‘The Marching Force’ is an elite group of talented, young musicians and dancers who are academically accomplished,” Dr. Harvey stated in a HU press release.

The parade marches down Central Park West to 59th Street then heads east to 6th Avenue and then south along 6th Avenue all the way to 34th Street and Herald Square pass Macy’s Department Store.

The Marching Force will spend the next 18 months planning their appearance, rehearsing and fundraising, which will bring the University and the community closer as well as preparing students for the march of a lifetime.

Hampton was selected from more than 100 applicants to march in the annual holiday spectacle and will join the revelry along with other iconic Macy’s staples: floats, giant character balloons, clowns and superstar performers galore on Thanksgiving Day 2020, helping to create an unforgettable experience for millions.

HU’s drumline recently performed in the Tournament of Roses Parade prior to the Rose Bowl and in 2018, The Force performed at Honda Battle of the Bandsin Atlanta.