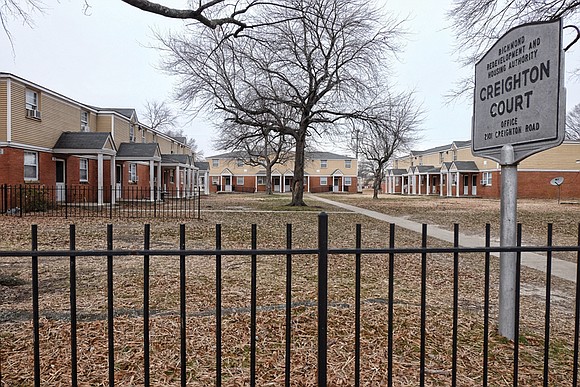 The new chief executive officer of the Richmond Redevelopment and Housing Authority is vowing that the agency will move “expeditiously” to redevelop the city’s decaying public housing.

Damon E. Duncan put that at the top of the list of priorities he outlined in his first public comments Monday.

He said he wants to move quickly to carry out RRHA’s long-standing goal of overhauling, replacing and modernizing the city’s nearly 4,000 deteriorating public housing units, the largest and most essential inventory of affordable housing for the city’s lowest income residents, seniors and disabled people.

At his first news conference since taking the helm March 25, Mr. Duncan also promised to communicate honestly with residents about coming changes, to step up preventive maintenance to ensure residents do not again lose heat in the winter and to work closely with police on a strategy to continue the downturn in crime in the city’s public housing communities.

The 51-year-old housing veteran emphasized the need to push the plan for revamping public housing that his predecessors set in motion.

But he called the coming changes critical to address the decline in the majority of housing units that date back 40 years or more and that “have outlived their useful life by 10 to 15 years.”

He told reporters, several RRHA board members and staff and City Council President Cynthia I. Newbille, who came to welcome him, that he has visited all of the properties that RRHA operates, including the Big 6 public housing communities — Creighton, Gilpin, Fairfield, Hillside, Mosby and Whitcomb courts.

“I wanted to see the properties in their normal state, to see how the properties operate and to take in all we have to work with,” said Mr. Duncan, who led the housing authority in Elgin, Ill., for seven years before joining RRHA. During his career, he also has worked for public housing agencies in Detroit and Pontiac, Mich., and ran his own housing consulting firm for five years.

He said what he found in Richmond were problems endemic to public housing across the country as he took an inventory of both the physical housing stock and the staff he will be working with.

“There are only two reasons that the properties would get to this state — either by commission or omission,” he continued. But whatever the reason, he said he has already told city leaders that change must come.

Mr. Duncan announced that he has brought on Terese Walton, his former boss when he worked in Detroit more than 20 years ago and an associate in the years since on a variety of public and affordable housing projects. At RRHA, she will serve in the No. 2 position as executive vice president.

Mr. Duncan apparently will use the same model he followed in leading Elgin, Ill., to eliminate its public housing and replace it with remodeled, largely privatized Section 8 properties in which tenant rents are subsidized. Under that model, the housing authority retains a minority share of the ownership and accepts and reviews applications for housing while leaving much of the management to the private owner-operator.

RRHA has used that model in replacing its former 60-unit Dove Court property in Highland Park with modern apartments and is employing it in replacing the Fay Towers senior high rise in Gilpin Court with three developments, including a new development underway at 1st and Duval streets in Jackson Ward.

The RRHA also is engaged in transferring control of 11 smaller properties with 553 units from government ownership to a private company that, as majority owner, will remodel and manage them.

In addition, RRHA is working with a nonprofit partner to create new housing in the Creighton Court area to replace much of that public housing and also has begun transferring some residents to other private, newly built Section 8 apartments in Richmond and Henrico County.

Mr. Duncan said that Gilpin Court is likely to be the next large public housing community to be converted. That would support the private development of apartments in the historic St. Luke Building and the impending private conversion of the former Baker Elementary School building into senior apartments for additional residents of Fay Towers. That work is expected to begin in June.

Since arriving in Richmond, Mr. Duncan also has put maintenance of existing units high on his to-do list. On Wednesday, two days after his news conference, Mr. Duncan announced that RRHA has hired a pest control company and will be working with public housing residents to prevent rodent infestation.

He noted during the news conference that heat finally had been restored to all units two weeks before the RRHA turned off the heat on May 1. He noted that 40 percent of RRHA’s boilers have been replaced and that 60 percent would be replaced by next October when the heat gets turned on again.

He promised more preventative maintenance, and noted that RRHA has brought in experienced people to support that effort. That includes former city Public Works Director Emmanuel O. Adediran, who since December has served as RRHA’s director of capital improvement projects and facilities.

On the crime front, Mr. Duncan said that he had breakfast recently with interim Police Chief William C. Smith and plans a more extensive meeting to discuss a strategy to continue reducing crime.

Mr. Duncan said he wants RRHA to allocate $300,000 in unused funds left since the RRHA police force was disbanded five years to help pay for any changes. The city police department now has at least eight officers dedicated to public housing.

While overall reported crime in public housing has dropped more than 20 percent, Mr. Duncan said that there are still challenges, particularly from non-residents. He cited the example of a shooting last month in Hillside Court that left two dead and one wounded.

While he again expressed condolences to the families, he noted that none of those shot lived in the South Side complex. He called it a familiar story in which residents are neither the victims nor the perpetrators of the crimes that grab media attention.

“Whereas crime and tragedy are not good any way you look at it,” he said, “it just seems that some people feel that they can go to the public housing communities and commit their atrocities and get away with it.”