‘She the People’ brings town hall to Richmond on May 18

Aimee Allison wants “purple” Virginia to be an epicenter in elevating the political voice and voting power of black women and other women of color in the November battle by Democrats to win control of the Virginia General Assembly and the presidential election fight in 2020. 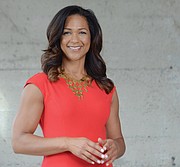 Ms. Allison is founder and leader of the year-old national political group “She the People.” She will be in Richmond Saturday, May 18, to lead a town hall meeting to lay out an agenda and energize women of color to make their political strength felt in the coming political fights, including the selection of candidates in the Tuesday, June 11, party primaries.

The town hall is open to the public and will take place from 9 a.m. to 3:30 p.m. Saturday at the Claude G. Perkins Living and Learning Center at Virginia Union University, 1500 N. Lombardy St.

“Virginia is a key state,” the 49-year-old California resident told the Free Press in a telephone interview May 2 as she prepared for the event. “As a Southern swing state, Virginia is both driving and mirroring what is happening nationally.

“Women of color are a core Democratic constituency who play a huge role in primary and general elections,” Ms. Allison said. “There is no question that Democrats cannot win without their vote, and that Democrats have a real chance at winning control of the legislature and in advancing their numbers in Congress when they take up the issues that drive black women.”

Ms. Allison, who is considered one of the architects of the 2018 “blue wave” that sent a record number of women of color to Congress, recently won attention with a presidential candidates forum in Houston that drew more than 2,000 people.

Also the president of Democracy in Color, Ms. Allison hopes that at least 200 people from around Virginia will turn out for the Richmond town hall to consider the issues important to women of color and want candidates to support.

“We want to focus attention on the racial, economic, gender and social justice issues that are central to the lives of women of color,” said Alexsis Rodgers, director of communications for Virginia Planned Parenthood, who is among those supporting the event.

“Women of color can be a powerful voting block if we stand together on issues of importance to ourselves, our families and our communities,” said Ms. Allison, who is planning similar forums in other swing states.

Today, “one in five voters in primaries are women of color, and we are 25 percent of the voters in key swing states, such as Virginia, Texas, Florida, Georgia, South Carolina and Arizona,” she said. “We need to use that voting power to create a more inclusive and just democracy.”