2 men arrested, another sought in death of Markiya Dickson, 9 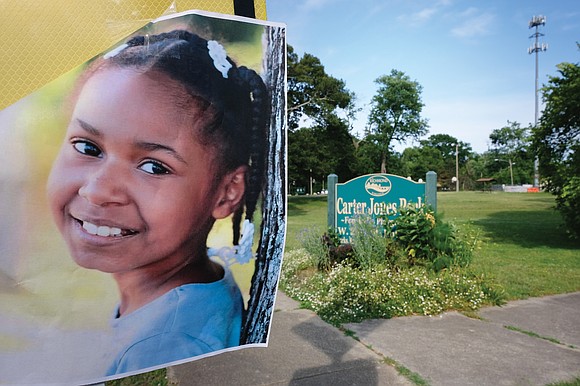 Two young South Side men have been arrested and charged in the murder of 9-year-old Markiya Dickson at Carter Jones Park during the Memorial Day weekend.

Jermaine Davis, 21, and Quinshawn Betts, 18, both of the 4500 block of Millenbeck Road, were arrested last week

and made an initial appearance in Richmond General District Court on Monday. Both were charged with murder, two counts of malicious wounding and three counts of using a

firearm in the commission of a felony.

Police are still looking for Jesus Turner, 20, of Chesterfield, who police described as 5-foot-7, 120 pounds and known to frequent Whitcomb Court.

Markiya, a third-grader at Crestwood Elementary School in Chesterfield County, was shot and killed May 26 during a community cookout she was attending with her family at Carter Jones Park on Bainbridge Street in South Richmond. More than 1,000 people, including family, friends and many of her former classmates at Redd Elementary School in Richmond, attended her funeral, which was held at the Arthur Ashe Jr. Athletic Center in Richmond.

Eleven-year-old Jaquez Moses was wounded during the shooting that broke out near the basketball court in the park.

Police said a third person who was struck by the gunfire came forward later. No details were available.

Chief Smith credited the arrests to the team of detectives working the case “and tips received from residents who were outraged by the death of a young child due to senseless gun violence.”

“But, as with any investigation, we strongly still urge people with information to come forward,” Chief Smith said.

In late July, the FBI announced that despite a $20,000 reward for information leading to an arrest, only one tip had been received. Po- lice are asking that any witnesses, or anyone with information, to come forward.

“There is no win,” Chief Smith said. “It is a loss for everybody.”

“We hope this progress brings comfort to Markiya’s family and the community,” Mayor Stoney said.

All tips will remain anonymous.