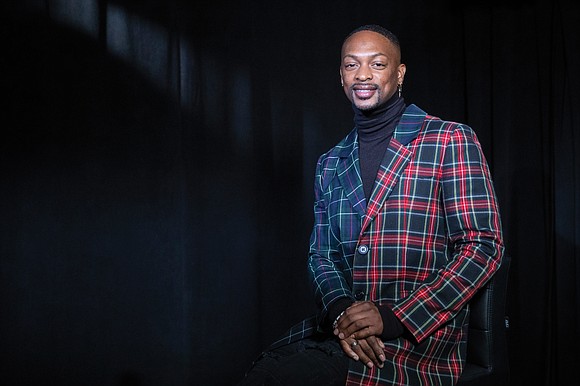 NEW YORK - LaQuan Smith is all about the champagne lifestyle — bubbly, luxurious and, especially when it comes to the women’s clothes he creates, sexy.

The designer made his New York Fashion Week debut at 21 with a sleek and sassy collection he dubbed “Water Goddess.” Ten years later, his rise seems meteoric in fashion years, from sneaking into industry events and handing out wildly colored and textured leggings he sewed in his Jamaica, Queens, basement to outfitting Beyoncé, Serena Williams, Jennifer Lopez, Kim Kardashian and Rihanna.

At 31, some see the self-trained Mr. Smith as a pioneer in pushing the fashion culture forward, but it was far from easy. He said in a recent interview that he owes his success to his singular passion — fashion — and staying true to himself by trusting his gut.

“It’s just by doing what I love, just doing things that speak and represent me,” said Mr. Smith, dressed in a killer red-and-blue plaid jacket, turtleneck, ripped black denim jeans and pristine white kicks. “I always like to start with a level of authenticity.”

That authenticity was in play Oct. 15 when Moet & Chandon named Mr. Smith one of its “Nectar of the Culture” ambassadors, along with other trailblazers in music, art and more, in celebration of Moet Nectar Imperial Rose. It’s the latest in a long line of collaborations as Mr. Smith continues to build his namesake brand, sticking close to home to produce his clothes in Queens.

“New York used to be the primary source of garment construction, and that’s something that I wish we could sort of go back to,” Mr. Smith said. “Manufacturing in Queens is just something that organically happened.”

Some of Mr. Smith’s lows struck early in life, after his grandmother taught him to sew when he was 13. After putting on a fashion show at his middle school, he was thrilled to attend the High School of Art and Design, only to say goodbye to bustling New York in the 11th grade when his mother moved the family to Delaware, a place that held no allure. It was then that he was diagnosed with bone cancer, a truly “humbling experience,” he said.

Mr. Smith recovered and continued to pursue his fashion dreams, desperate to return to New York, but he was rejected by both the Fashion Institute of Technology and the Parsons School of Design.

“I was just kind of devastated and at a loss. I didn’t really know how to get my head up off the ground,” he said.

That’s when he was offered an internship at BlackBook, the art and culture magazine, working for then-fashion director Elizabeth Sulcer. She was in demand for industry parties and events, and Mr. Smith made use of those contacts, showing up uninvited at times dressed in his own designs. He took to handing out his leggings to whoever would take them.

In 2010, the effort paid off when he spotted Lady Gaga in a pair as he flipped through a tabloid while with his mom at a supermarket.