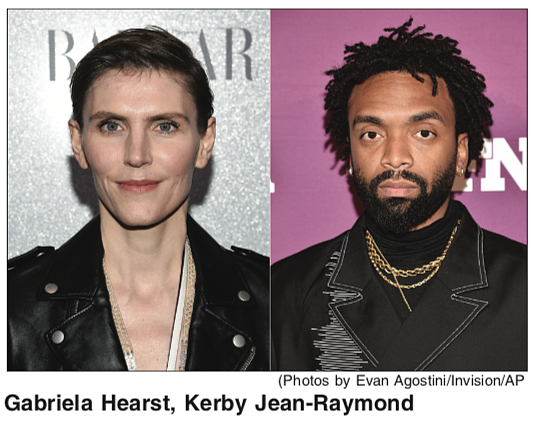 NEW YORK The Council of Fashion Designers of America gave its top fashion awards on Monday to Haitian-American Kerby Jean-Raymond for menswear and Gabriela Hearst for womenswear.

The two designers led a group of winners that the CFDA said was the most diverse in the 39-year history of the awards.

It was the second honor in two days for Mr. Jean- Raymond, the prominent Black founder of the Pyer Moss label, who also was named Designer of the Year by Harlem’s Fashion Row in a virtual ceremony on Sunday.

There were no acceptance speeches in a video announcement that lasted less than 10 minutes, but Ms. Hearst issued a statement in which she sent “a kiss” to Uruguay, where she was born, and saluted her fellow nominees as well as designers everywhere, many of whom are struggling to stay afloat amidst the coronavirus pandemic.

“We are all in this together,” Ms. Hearst said.

The designer is known for sleek power-dressing, like a teal pantsuit modeled by then-incoming U.S. Rep. Alexandria Ocasio-Cortez in 2018 in Interview magazine. The jacket was dubbed the Angela, for Black activist Angela Davis.

The Brooklyn-based Mr. Jean-Raymond, who began working in fashion as a teenager, founded Pyer Moss in 2013. He has placed the African-American experience at the center of his craft, and gained sudden fame with a 2015 fashion show that opened with a long video about police brutality against Black people.

He recently said that racism had become more overt since the 2016 election.

“We’re unearthing things now. We’re realizing that we had outward racists among us in the fashion industry,” he told the Washington Post in June. “You’re seeing images now, you’re seeing black-face parties—the type of stuff we were enduring as young designers, a lot of that stuff was covert.”

Following Monday’s announcement, Mr. Jean-Raymond posted a brief Instagram video showing him opening up the box containing his silver trophy and winking at his followers.

Mr. Clemens, the accessories design winner, was born to Liberian parents in New York. He founded his unisex brand, Telfar, while still a student at Pace University. Famous for his popular Telfar “shopping bags,” he is a 2017 winner of the CFDA/Vogue Fashion Fund Prize.

“My friends and family encourage me to manifest my singular American Dream,” Mr. Rogers wrote on Instagram, “and I feel that it’s increasingly important to emphasize that specificity and clarity of vision, especially today.”

The awards were announced by designer Tom Ford, chairman of the CFDA and also a current nominee, in a brief video announcement on Runway360, the organization’s new digital platform. They were originally scheduled to be presented, as usual, at a glitzy ceremony in June, but the event was canceled due to the pandemic.