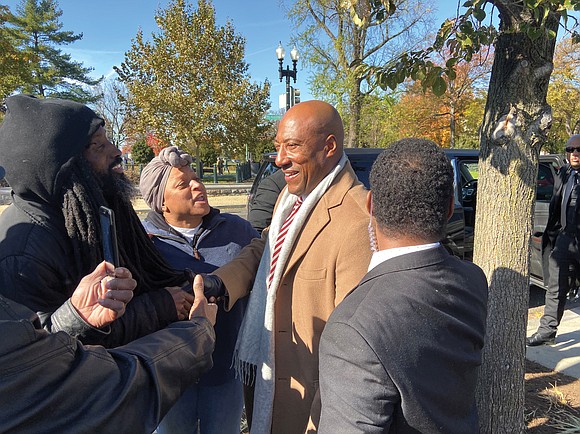 Media mogul Byron Allen is surrounded by supporters after leaving the U.S. Supreme Court, where arguments were heard Nov. 13 in his lawsuit against Comcast. Photo by Lawrence Hurley/Reuters

The justices appeared to be in broad agreement Nov. 13 that an appeals court applied the wrong legal standard in allowing business owner Byron Allen’s $20 billion suit against Comcast to go forward.

Mr. Allen has a separate $10 billion lawsuit against Charter Communications.

The issue at the court is whether Mr. Allen needs to show in his complaint that race was among the factors in Comcast’s decision not to offer him a contract or whether it was the decisive factor.

Alarmed by the U.S. Supreme Court’s intervention, civil rights groups have warned that the nation’s highest court could make it much harder to prove race discrimination in contracting under a civil rights law that dates to 1866.

A ruling for Comcast probably would not be the final word. Several justices indicated they think the 9th U.S. Circuit Court of Appeals in San Francisco should take another look.

But Comcast and Charter Communications, the nation’s two largest cable providers, have passed on carrying Mr. Allen’s channels. The now-merged AT&T and DirecTV carry the channels after Mr. Allen sued them and they settled.

A decision is expected by late June.