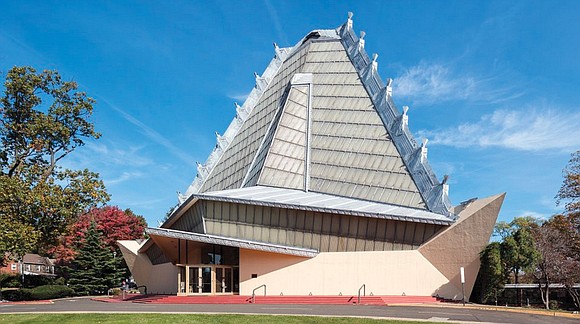 The Beth Sholom Synagogue, designed by Frank Lloyd Wright and opened 60 years ago, still stands as a functioning place of worship and an art piece in Elkins Park, Pa., just north of Philadelphia. Darren Bradley

ELKINS PARK, Pa. Sixty years ago, just before the Jewish High Holy Days, members of a Conservative synagogue processed into their new sanctuary, marking a new era in their congregational life and in modern religious architecture.

The only synagogue designed by Frank Lloyd Wright, Beth Sholom Synagogue still stands six decades later in this suburb north of Philadelphia as both a house of prayer and an unusual, functioning piece of art.

Recalling in its design the place where Scriptures say the Ten Commandments were given to Moses, Beth Sholom is lesser known than the Guggenheim Museum in New York, Fallingwater or Mr. Wright’s other landmark creations. It nevertheless attracts those who are aware of its connections to the famous architect.

“The design for Beth Sholom has taken the supreme moment of Jewish history and experience,” Mr. Wright said at the time, “the revelation of God to Israel through Moses on Mount Sinai, and translated that moment with all its significance into a design of beauty and reverence.

“In a word, the building is Mount Sinai, where Israel first encountered God.”

The synagogue’s exotic geometric shape, which appears atop a rise and around a bend as drivers approach it along Old York Road, was suggested by Beth Shalom’s then-Rabbi Mortimer J. Cohen as “a dream and hope in my heart” to Mr. Wright in a 1953 letter. Mr. Wright responded to Rabbi Cohen, whose letter included a rough sketch of his idea, beginning a close bond the two men developed, mostly through correspondence.

“They had a very long, sustained dialogue about this building over a six-year period,” said Joseph M. Siry, author of the 2011 book “Beth Sholom Synagogue: Frank Lloyd Wright and Modern Religious Architecture.”

Mr. Wright would eventually grant Rabbi Cohen the title of co-designer. The architect, a Unitarian whose uncle was an organizer of the 1893 Parliament of the World’s Religions, also referred to the rabbi and himself as “congenial workers in the vineyard of the Lord.”

Dr. Siry said Rabbi Cohen, in turn, said: “I found in Mr. Wright a genuinely spiritual person who responded in his unique way to the great teachings of my religion.”

The building was dedicated, and the rabbi’s dreams were realized, just months after Mr. Wright’s death, on Sept. 20, 1959.

Rabbi Cohen showed in his original sketch that he did not want a traditional longitudinal design. Rather, he desired a space, Dr. Siry said, with “a much more collective, in-the- round feeling.”

That idea continued in the slant of the floor.

“It slopes down toward the front but it also slopes in toward the center,” said Dr. Siry, an art history professor at Wesleyan University in Connecticut.

For his part, “Wright wanted to create the kind of building in which people, on entering it, will feel as if they were resting in the hands of God,” theAmerican Institute of Architects notes in its online description.

Dr. Siry said the building, with its 108-foot-tall sanctuary, achieves the “mountain of light” Mr. Wright was hoping for with the synagogue’s tetrahedron design.

Just before night falls, said Helene Mansheim, director of the synagogue’s visitor center, the light from the sunset can turn the sanctuary a golden color.

Designated a National Historic Landmark in 2007, the synagogue is listed by the AIA as one of 17 buildings designed by Mr. Wright that are examples of “his architectural contribution to American culture.”

Recently, new sights and sounds have been added to the synagogue, whose name means “House of Peace.”

In part to mark the building’s 60th anniversary, Beth Sholom’s preservation foundation as commissioned a multimedia installation by Philadelphia artist David Hartt that evokes the Jewish and African-American diasporas.

The exhibition, titled “The Histories (Le Mancenillier),” features orchids and other tropical plants, along with tapestries, videos and the music of composer Louis Moreau Gottschalk.

Cole Akers, curator of the exhibition, said the installation reflects how Beth Sholom’s congregation, a century old this year, has related to urban development. The congregation began in north Philadelphia in a building that has become the location of Beloved St. John Evangelistic Church in a community that is now predominantly African-American.

“The relationship between these two congregations led Hartt to consider the constant movement of Black and Jewish communities as a result of political, economic, and social currents,” Mr. Akers said in an email message.

The exhibition, which opened on Sept. 11, will close Sept. 26 through Oct. 10 around the time of the High Holy Days and reopen through Dec. 19.