VUU pulls out a win in last 21 seconds 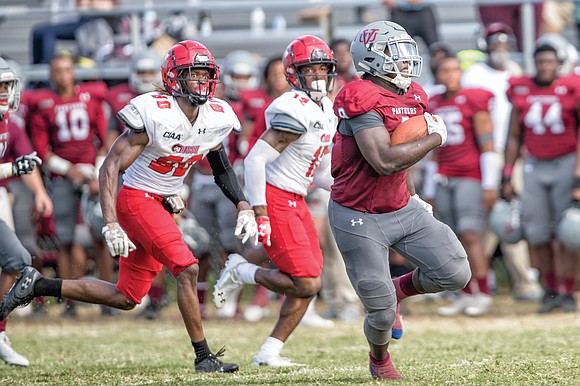 The Virginia Union University Panthers have played like Houdini in their last two outings, escaping disaster on their home field.

This Saturday, Oct. 5, the Panthers hope to take that magic to Livingstone College in Salisbury, N.C., in a battle of CIAA championship contenders.

In sports jargon, there’s winning by a nose, by a hair, even by a split second.

The Brazilian born Souza booted three field goals during the game at Hovey Field, most dramatically a game-winning 25-yard field goal with a mere 21 seconds left.

VUU fans are getting accustomed to being nervous.

That set up Souza’s decisive kick that pushed VUU’s record to 3-1 overall and 1-0 in the CIAA.

Tyrone Glanton and Hammond spearheaded the Panthers’ defense against Winston-Salem State. Glanton, a graduate student from Miami, was in on eight tackles and has 31 stops for the year.

Hammond, arguably the CIAA’s top NFL prospect in years, had seven tackles against the Rams and has 40 for the season.

Like VUU, upcoming opponent Livingstone College also is enjoying life on the gridiron. The Blue Bears are 4-0, with wins over Chowan University, Elizabeth City State University, Allen University of Columbia, S.C., and most recently a 35-19 victory over Lincoln University.

Livingstone travels best by the arm of quarterback Miles Hayes. The Miami native has hit 68 percent of his passes. He averages 204 yards through the air with eight touchdowns.

Livingstone appears to be on the uptick under fifth-year Coach Daryl Williams. The Blue Bears were 0-10 in 2017 and 3-6 a year ago, including a 52-19 loss to VUU at Hovey Field.

This is a pivotal game for both teams. With tough schedules looming, both need a victory to remain viable candidates for the CIAA championship game in Salem.