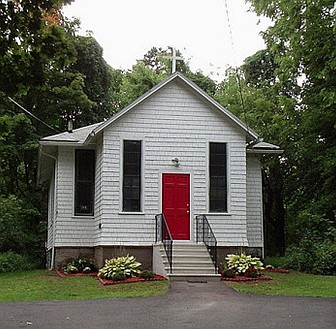 AMHERST, Mass, - Inside a small Woodside Avenue church set amongst the trees, the oldest African-American congregation in the northern Pioneer Valley has made its home for more than a century.

But nearly a decade after celebrating the building’s centennial in 2010, the Goodwin Memorial A.M.E. Zion Church needs extensive repairs, including a new oil burner estimated to cost at least $13,000.

For Peter Blood, a member of the Mount Toby Friends Meetinghouse in Leverett, Mass., and co-convenor of the Interfaith Opportunities Network, a fundraising initiative this month is not only about providing help to Goodwin but confronting the ongoing effects of slavery in the United States that began when a ship carrying enslaved Africans arrived in Virginia 400 years ago.

“Faith communities can have a role in the process of redemption of a nation,” Mr. Blood said.

In addition to this reparative justice, Mr. Blood said the Interfaith Opportunities Network, made up of more than a dozen faith communities, is becoming more active in organizing larger events that demonstrate what people share in common.

Hampshire Mosque,Amherst Bahai’ Local Assembly, the Jewish Community of Amherst and the Unitarian Universalist Society of Amherst are among those joining together to launch what is being called “Standing Together: Restoring Goodwin,” which continues an interfaith partnership that two years ago helped the mosque complete its building in Hadley, Mass.

On Saturday, Oct. 26, a harvest dinner will be held at Grace Episcopal Church’s parish hall, followed by a gala concert at First Congregational Church.

“A big part of our being part of a diverse community is having diverse faith communities,” Mr. Blood said. “Lots of different people feel invested in making this a success.”

Roger Wallace, a retired Fort River School teacher who has attended services for nearly a quarter century at Goodwin, said the church has an important history for African-American families in Amherst. While the congregation today only numbers about 30, its choir from the base of the Amherst Area Gospel Choir, the best known ministry of Goodwin.

In Amherst, black families departed from a predominantly white congregational church in 1869 so they could have black leadership. “Folks couldn’t worship the way they wanted to, so they broke away,” Mr. Wallace said.

The members were able to put $117 down to acquire the land and later secured the remaining $601 needed to acquire the property. They received further assistance from Booker T. Washington in raising money to build the church in the early 1900's.

Mr. Wallace said there is a lot of pride in being part of the African Methodist Episcopal Zion denomination, known as “the Freedom Church” because of its active role in the abolitionist movement and assisting Harriet Tubman with the Underground Railroad that brought slaves to freedom.

The church hopes that money raised from the fundraisers also will go toward matching grants from the town of Amherst’s Community Preservation Act account and from the Massachusetts Historical Commission.

Mr. Wallace said the idea is to keep the building, which has been on the National Registry of Historic Places since 2000, viable for another 20 to 30 years. In addition to the oil furnace, which died last spring, the building requires other immediate repairs.

“The most important thing is to have a building that works for the congregants right now,” Mr. Wallace said. “If we don’t have a furnace, no one will be going to church in the winter because it’s too cold.”

“You want to take care of what you have. Let’s get the building to the point where we can be proud of the way it looks, even with its idiosyncrasies,” Mr. Wallace said.