Three candidates are vying to become Henrico County’s next sheriff, succeeding longtime GOP Sheriff Mike Wade, who is stepping down after serving in the position since January 2000.

Col. Gregory, who earned bachelor’s and master’s degrees from the University of Richmond, believes the key factor in progressive leadership is equal opportunity in recruitment, retention and succession management, especially with female and minority officers in roles of responsibility.

Col. Gregory, who has been endorsed by Sheriff Wade, has waged a campaign pledging to build on the successful programs started under Sheriff Wade. To help reduce recidivism, she said she would establish a Faith Advisory Commission to aid the re-entry of offenders into the community and to expand the Henrico Sheriff’s Office’s RISE and ORBIT drug rehab programs, Recovery in a Secure Environment and Opiate Recovery by Intensive Tracking, respectively.

In addition to working with partner agencies to try to reduce jail over-crowding, Col. Gregory said, if elected, she also would set up an advisory panel to help develop a comprehensive treatment plan to address the needs of female offenders, a growing segment in the jail.

Republican candidate Bob M. Matson, a Henrico Police detective, has served in the Henrico Division of Police since 2003, following seven years with the Albemarle County Police Department. The Virginia Military Institute graduate served in the Army, the Army Reserves and the Virginia Army National Guard. He also saw active duty in Iraq, where he earned the Bronze Star and Combat Action Badge.

Mr. Matson’s top issue is the critical shortage of staff at the jail, which he calls “dangerous and expensive.” He plans to institute better training and retention standards and form a panel to determine the reasons why staff leave the Henrico Sheriff’s Office.

If elected, Mr. Matson said he would expand drug treatment and alternatives to incarceration to help address the opioid crisis and reduce jail crowding.

During his 10 years with the Richmond Sheriff’s Office, Mr. Wadkins was in charge of development of the computer systems for tracking all inmate-related issues, from bookings, records, court appearances, property, visitation and inmate accounts.

He was instrumental in obtaining two supplemental pay raises for deputies by working with the city’s administration and was actively involved in getting the city to pay all of the retirement contributions for all constitutional officers, including the sheriff.

Presently, Mr. Wadkins, who has a bachelor’s degree from Virginia Commonwealth University, is president for operations and information technology for Vive Life Center.

Mr. Wadkins said, if elected, he plans to continue and enhance the RISE and ORBIT programs to help offenders overcome addiction and substance abuse. He also said he would turn over to the commonwealth many of the state inmates currently at Henrico Jails. He said that would reduce the county’s jail overcrowding by about 20 percent. 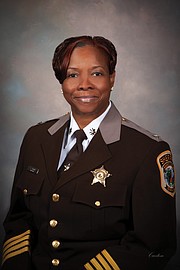 Education: Graduated from Highland Springs High School; bachelor’s in human resources management with a minor in leadership, University of Richmond; master’s in disaster science, UR

Voters should support me for Henrico County Sheriff because: I am the only candidate that is “Ready on day one” to step into the role of sheriff of Henrico County. I have dedicated the last 20- plus years of my career to acquiring the education and training that has enabled me to be promoted to every supervisory position in the Henrico County Sheriff’s Office from sergeant through my current position as undersheriff. These positions were not given to me. I competed and earned these positions based on my experience, education and leadership abilities.

What do you see as the top two issues facing the sheriff’s office? The top two issues facing the Henrico County Sheriff’s Office are jail overcrowding and the number of inmates struggling with mental illness. Safe and unique approaches and strategies must be utilized to reverse the trends of persons who experience longer incarcerations than other inmates because of their active addiction or serious mental illness. These types of incarcerations require evaluation of behaviors or time to restore mental competency, which leads to more days in jail.

How I plan to address those issues: Jail overcrowding and the rise in the number of persons in- carcerated with mental illness are issues that I will continue to address through partnerships with the Commonwealth’s Attorney’s Office, Henrico Police, Henrico Fire, Henrico County Mental Health, the County Manager’s Office, the Board of Supervisors, Henrico judges, our community stakeholders and any other entity that can aid in creating long-term sustainable change for this population. We will focus on alternatives for non-violent offenders and continue to partner with the crisis intervention team to ensure offenders with mental health needs are receiving treatment — just to name a few. 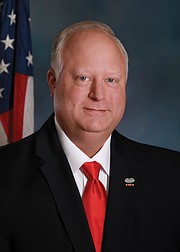 What do you see as the top two issues facing the sheriff’s office? Critically short staffing is dan- gerous and expensive, and addressing this is my top priority. Expanding drug treatment and alternatives will help address the opioid crisis and reduce jail crowding.

How I plan to address those issues: I will institute better training and recruitment standards and form a recruitment and retention panel to determine core reasons for staff leaving. For drug addiction treatment, I will institute a triage system to try to get treatment sooner, and I will partner with other government and private entities to make sure each person is placed in a program that fits them best. 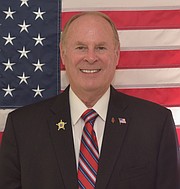 Voters should support me for Henrico County Sheriff because: I have 10 years of actual hands-on experience administering all aspects (finance, computer systems, kitchen, medical and firearms training) of a large Virginia jail (sheriff’s office) under three sheriffs rising to the rank of undersheriff, and 40 years experience in the private sectors of distribution, information technology and medical operations. While with the Richmond Sheriff’s Office, I was instrumental in obtaining two increases in the supplements to the pay for deputies by working with city administrators. I was also instrumental in getting the city to pay all of the retirement contributions for all constitutional officers.

How I plan to address those issues: I will work to remove as many state responsible inmates from Henrico jails as possible, thereby reducing the overcrowding conditions by up to 20 percent. This will in turn help reduce stressful working conditions. I will work with county officials to increase deputy pay as I did when I was with the Richmond Sheriff’s Office.