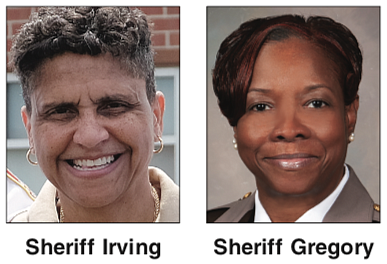 Sheriff Irving stated that the infected residents and personnel are in quarantine and that more testing is being scheduled.

At this point, the city jail appears to be facing a smaller problem than the Henrico County Jail where one in five residents tested positive for COVID-19.

In the state prison system, one in 20 inmates tested since March has the virus, state officials reported.

Sheriff Irving’s disclosure followed her statement Monday to the Free Press that none of the 99 residents tested positive on July 6 for COVID-19.

However, in response to a Free Press query, the sheriff stated on Wednesday that during a weekly walk-through of the jail after July 6, several residents “presented minor symptoms and were tested.” The results of those tests were positive.

The sheriff stated that the larger round of testing, done with the support of the Virginia National Guard and state Health Department, was conducted to provide “a representative sample of the inmate population to determine if further tests or actions would be necessary to maintain safety.”

She also noted that the Justice Center is following the recommendations of the federal Centers for Disease Control and Prevention when it comes to wearing masks, social distancing, frequent hand washing, temperature checks and increased sanitizing and cleaning on a daily basis.

Last week, Henrico Sheriff Alisa A. Gregory reported that 125 inmates have tested positive for the virus out of 650 inmates tested, mostly at the overcrowded Parham Road jail. None have had to be hospitalized. Six staff members also have tested positive among the 270 jail employees, she said.

Most of those testing positive are asymptomatic, with eight inmates having mild symptoms, Sheriff Gregory noted at a July 15 news conference.

Another 393 inmates refused testing, she said.

Henrico County Manager John A. Vithoulkas said testing is being done weekly at the jail, and the sheriff has imposed new limits on visitation to reduce the spread. The state Department of Corrections reported 1,544 inmates have tested positive for COVID-19 since mid-March, or nearly 6 percent of the total state prison population of nearly 28,000. Of those infected, 13 died, the department stated.

The inmates testing positive were at 17 facilities, with the bulk of the cases at Buckingham, Dillwyn, Greensville, Haynesville and Lawrenceville correctional centers and the Sussex II State Prison, the department stated.

The prison system saw an initial spike but now reports only 30 active cases of the virus among inmates. The department also provided early release to nearly 600 inmates with 12 months or less remaining on their sentences.

In addition, 101 staff members working at 18 state correctional facilities have tested positive, the department stated, but none have died, according to the department.