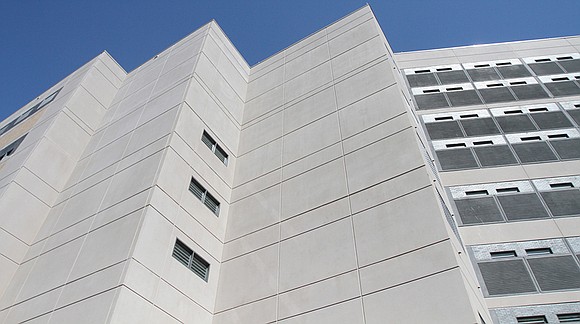 More than three months after the coronavirus pandemic began, the Richmond City Justice Center is conducting its first mass testing of inmates, deputies and staff for COVID-19.

“Now that tests are available, we are scheduled for mass test- ing on Monday, July 6, and Tuesday, July 7,” Catherine Green, a Richmond Sheriff’s Department spokeswoman stated in an email to the Free Press on behalf of Sheriff Antionette V. Irving.

Ms. Green stated that the jail previously had been supplied with only eight tests, three from the Richmond City Health District and five from the private, Mississippi-based Garcia Laboratory.

She stated that since mid-March, only four inmates have been tested as a prerequisite for medical appointments.

Activists staged protests in April urging the release of inmates to prevent the spread of COVID-19 in the city jail. Some other state and local jails and prisons have experienced virus outbreaks.

The lack of testing means that Sheriff Irving and Richmond regularly have reported no positive cases of coronavirus among inmates or deputies at the Richmond Justice since the outbreak began.

Phil Wilayto, editor of the Virginia Defender, first disclosed the lack of significant testing at the Richmond jail for the 650 inmates or staff in a report posted last week on Facebook.

Dr. Danny Avula, director of the Richmond City and Henrico County health districts, said the lack of reported cases at the city jail means he previously had not “considered widespread testing” at the facility a priority.

The Virginia Department of Corrections, which operates 40 prisons and other secure facilities, has reported 1,494 positive cases and one death, mostly at a handful of its operations.

The Chesterfield County Jail has reported 37 cases, while about 25 young people in custody at the Bon Air Juvenile Correctional Center outside Richmond tested positive in April.

Separately, GRTC reported that mass testing of employees has not resulted in any findings of additional positive cases. Fourteen employees have tested positive since March 13, and virtually all were mild cases, the company has said.