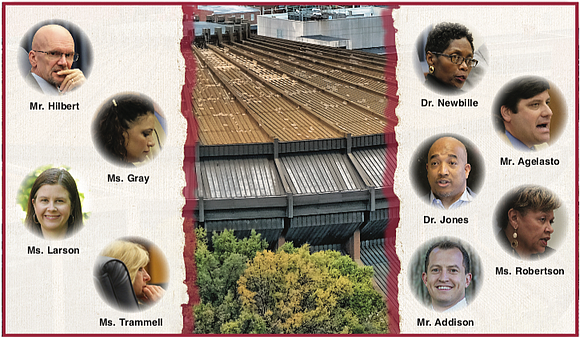 The divisions among City Council members over the Coliseum replacement plan appear to be hardening.

In a move reflecting that division, five members of City Council quietly decided to host public meetings to go over the details of the proposal to replace the Richmond Coliseum — without letting the four others participate in that decision.

The first of the nine meetings — all open to the public — is set for 10 a.m. to 2 p.m. Monday, Sept. 23, on the second floor of City Hall, according to a schedule 5th District Councilman Parker C.Agelasto released on Facebook.

The majority, led by Council President Cynthia I. Newbille, 7th District, made the decision Sept. 16 without informing the four other members who were out of the room and apparently unaware that the idea was being considered.

Before the decision, the nine members had moved into closed session on a separate matter in a separate room. When that ended, four of the members continued talking as the others resumed the public meeting, making no effort to get their colleagues to return.

Approval of the series of public meetings came during the council’s informal session that is held before the regular, publicly televised meeting. No mention was made of the meetings on Navy Hill’s Coliseum replacement proposal during the regular session.

The four are considered, at this point, likely opponents of the Coliseum replacement project. The proposal would require a super-majority of seven members to allow the sale of city property to make the project happen.

The decision to hold the series of public meetings through Dec. 9 came as the council also began advertising for an independent consultant to review the plan that could cost taxpayers $600 million over 30 years.

Council also is poised to appoint the final seven members of an advisory commission it created to review the Coliseum replacement proposal that could be accompanied by more than $900 million in private investment in apartments, offices and retail operations on mostly city-owned property near City Hall.

The project, embraced by Mayor Levar M. Stoney, is the brainchild of the Navy Hill District Corp., which is led by the top executive at Dominion Energy, Thomas F. Farrell II. The development company and project are named after the African- American neighborhood that once occupied the area from the Coliseum to City Hall.

The decision to have the lengthy briefings from the administration has disappointed Ms. Gray, who believes Dr. Newbille and her council allies have another motivation.

“It appears that they are trying to undermine the (council) commission before it is even seated,” Ms. Gray said.