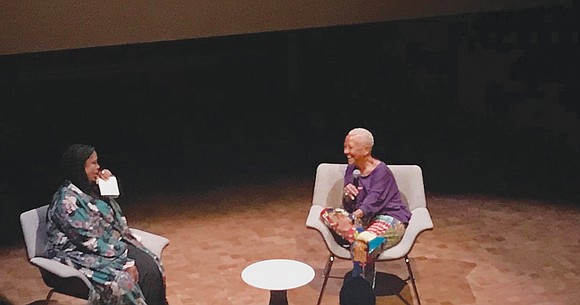 Ms. Giovanni stood on stage at the Institute for Contemporary Art at Virginia Commonwealth University on Sept. 11 and candidly told the audience how her friendship began with Nobel Prize- winning author who died Aug. 5 at age 88.

“I picked up (Ms. Morrison’s novel) ‘The Bluest Eye’ and I read it and I thought ‘Oh my God this is brilliant, I have to meet this woman,’” Ms. Giovanni said.

Then she did what most people don’t when they finish an inspiring book. Ms. Giovanni walked from her apartment in New York across town to Random House publishing company where Ms. Morrison was working. After Ms. Giovanni patiently waited, Ms. Morrison agreed to meet with her. They had a cup of coffee across the street, beginning a 40-year friendship.

Ms. Giovanni, a University Distinguished Professor in the English Department at Virginia Tech, was in Richmond leading a discussion following the documentary, “Toni Morrison: The Pieces I Am,” that was viewed by a packed auditorium in the ICA.

The film detailed Ms. Morrison’s life starting with her upbringing in Lorain, Ohio, her education at Howard University and then Cornell University before launching a critically acclaimed literary career authoring 11 novels, including “Beloved” and “Song of Solomon.” Ms. Morrison was the first African-American female editor at Penguin Random House and the first African-American woman to win the Nobel Prize in literature in 1993. She also won a Pulitzer Prize in 1988 for “Beloved.”

The film peered into Ms. Morrison’s life through interviews with Ms. Morrison and other notable literary figures such as Hilton Als, Fran Lebowitz and Sonia Sanchez.

ICA film curator Enjoli Moon, founder of the Afrikana Independent Film Festival that took place last weekend in Richmond, said the museum had been interested in screening the documentary. But when Ms. Morrison died last month, hosting the event transitioned into an honor.

“I’m excited to be able to present this film, something that I think will help to elevate her legacy,” Ms. Moon said.

The two-hour documentary directed by Timo- thy Greenfield-Sanders was released in June. The theme of sisterhood weaves throughout the film, highlighting moments shared between Ms. Morrison and Oprah Winfrey and with civil rights activist and former university professor Angela Davis. Ms. Morrison convinced Dr. Davis to write an autobiography shortly after she was found not guilty of murder in 1972. Firearms that Dr. Davis had purchased at a San Francisco pawn shop were used in a courtroom takeover and kidnapping in Marin County, Calif., in which a judge and three others were killed.

Ms. Giovanni told the Richmond audience she misses the sisterhood and the long talks on the phone with Ms. Morrison.

“Reading Toni Morrison is like reading the New Testament over and over,” Ms. Giovanni said. “You start to look at everything very, very differently.”

Ms. Morrison’s commentary in the film elicited laughter and tears from the audience. She discussed her experience working in an industry dominated by white men. She said she also was criticized for writing about slavery and for being African-American.

The documentary kicked off the second season of ICA Cinema, which screens films by independent filmmakers at 7 p.m. on the second Wednesday of the month.