Annual Southeast Community Day Parade to go on with or without permit, organizer says 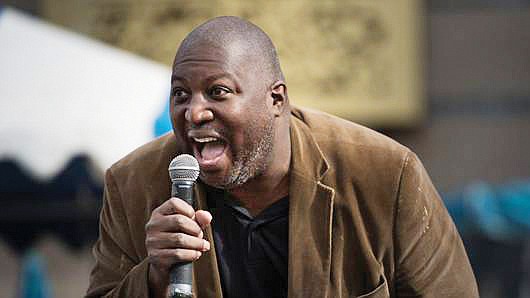 Newport News has ordered the cancellation of the annual Southeast Community Day Parade that an area chapter of the Southern Christian Leadership Conference has staged since 1991 — but the SCLC plans to defy the city and stage it anyway.

Andrew Shannon, president of the Peninsula District SCLC chapter and vice president of the SCLC’s Virginia unit, was noti- fied Monday afternoon that the City of Newport News would not issue a permit allowing the parade to take place as sched- uled on Saturday, Sept. 12.

A portion of the festival that typically is held on a church’s grounds could still go on, however.

Mr. Shannon said he received the notification Monday from Newport News City Manager Cynthia D. Rohlf after he issued a public statement criticizing the city for failing to respond to the chapter’s application for a parade permit after 11 months.

Despite denial, “we are going to engage in non-violent direct action by proceeding with our events as scheduled,” Mr. Shannon stated in an email response Monday to a Free Press query.

“We believe that we will prevail legally against any and all adverse actions that may be directed against us.”

Mr. Shannon said the chapter has a First Amendment right to hold the parade and would exercise that right.

While many other summer and fall concerts, festivals and programs have been canceled in Richmond and elsewhere because of the pandemic, Mr. Shannon said this parade and festival is too important to shut down and could go on safely.

He launched the event to build pride and provide positive recognition for the city’s majority African-American Southeast section of Newport News that is identified as a hot spot of poverty and crime. He said he has invited nationally known African-American leaders to participate in the milestone 30th year program.

“We have three decades of experience with this event, and we know we can pull it off without spreading illness, even with the virus threat,” Mr. Shannon said. “This year, we planned for virtually all participants to be in vehicles or on floats, and we anticipate that attendees will stand on their porches to view the procession.”

He said plenty of people are doing drive-thrus for birthday parties and other events.

In past years, Newport News has partnered with the parade to enable a viewing stand to be set up on a main street, Jefferson Avenue, blocked entry into the parade route and taken other steps to enable the parade to go on. But the permit denial means the city will not provide such services this year.

Ms. Rohlf did not respond to a Free Press request for comment.

He said Ms. Rohlf has turned a blind eye to events the Black Lives Matter movement has held on city streets even though those organizing the events never obeyed city rules.

“We know for a fact that none of the other groups that have held marches and events in the city for the past three months filed for a parade permit,” he said, adding that Ms. Rohlf is aware of that situation.

That flouting of city requirements, he said, stands in sharp contrast to the actions of the SCLC chapter, which filed for its permit Sept. 16, 2019.

The Southeast Parade and Festival, one of several events the chapter sponsors each year, features the region’s largest parade, according to The Daily Press, and a gospel festival with acclaimed artists such as Luther Barnes and Jekalyn Carr.

According to the permit application Mr. Shannon filed with the city’s director of planning and director of engineering, the parade is expected to have 3,000 participants and 150 marching units, floats and vehicles.

“For us, the rejection notice is a call to action to defend our rights as citizens of this city, this state and this nation,” Mr. Shannon said. “The SCLC is not being treated fairly or equally. What I see is racism again rearing its ugly head. We cannot stand for it.”