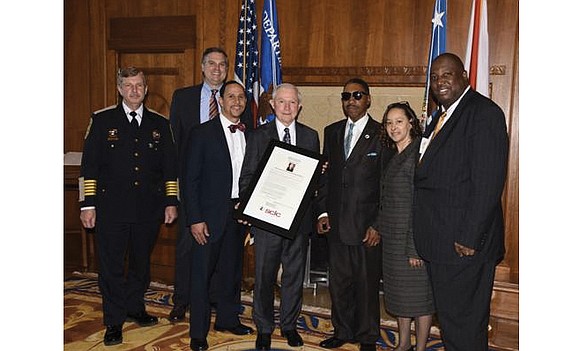 Sending shockwaves through the civil rights community, leaders of the Virginia affiliate of the Southern Christian Leadership Conference used the anniversary of the assassination of Dr. Martin Luther King Jr., a co-founder of the national group, to honor what many would view as his nemesis, U.S. Attorney General Jeff Sessions.

The president of the state SCLC unit, the Rev. William Avon Keen of Danville, led a delegation to Washington this week to meet with Mr. Sessions and present him with a proclamation that he and the vice president, Andrew Shannon of Newport News, signed saluting the attorney general for his work on behalf of civil rights and his “dedication and service to humanity.”

The presentation was made Tuesday, the 49th anniversary of Dr. King’s slaying in Memphis, Tenn., where he was supporting sanitation workers in their battle for better pay and working conditions.

The SCLC leaders’ meeting came just a day after Mr. Sessions put a hold on all of the reform pacts that the U.S. Department of Justice signed with 14 police departments across the nation aimed at ending practices allowing the long-running abuses and killings of African-American adults and children.

Mr. Sessions’ decision, announced on Monday, created alarm among the NAACP and other civil rights groups because it appears to signal a major pullback from the Obama administration’s past efforts to ride herd on an array of police departments notorious for mistreating African-Americans, ranging from Baltimore to Cleveland, Chicago and Los Angeles.

“It is not the responsibility of the federal government to manage non-federal law enforcement agencies,” Mr. Sessions wrote in outlining his efforts to comply with President Trump’s promise to restore “law and order.”

Rev. Keen was reluctant to criticize Mr. Session’s decision to review the consent decrees in the wake of the meeting.

“He wants to find out what is going on and that could be a positive,” Rev. Keen said. “We need to wait to see what happens” after the reviews are complete.

The Virginia SCLC leadership appears to have acted on its own without seeking the sanction of the national organization.

Charles Steele Jr., president and CEO of the national SCLC did not return several requests Wednesday for comment.

The move to honor Mr. Sessions runs counter to the opposition that the NAACP and other groups mounted to his nomination, calling his record on voting rights and civil rights “deeply concerning,” even as supporters sang his praises.

As many noted in seeking to halt his confirmation, Mr. Sessions, while a member of the U.S. Senate, opposed restoration of the Voting Rights Act after the U.S. Supreme Court gutted the law in 2013, refused to support equal pay for women and opposed the reauthorizing the Violence Against Women’s Act to fight sexual and domestic violence.

The reaction from the Rev. Rodney Hunter, president of the Richmond SCLC chapter, opposed the state SCLC decision.

“I’m in total disagreement,” said Rev. Hunter, president of the Richmond Chapter of the SCLC and pastor of Wesley Memorial United Methodist Church.