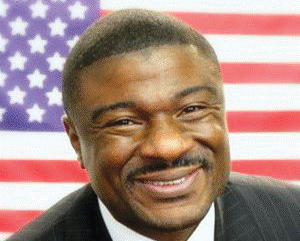 The Rev. Dwayne E. Whitehead is the leader of a new Richmond area chapter of the Southern Christian Leadership Conference.

“We need this new chapter because of the high level of crisis our community is facing when it comes to social justice,” said the Rev. Whitehead, who spent the past year organizing the group known as the SCLC James River Metropolitan Chapter.

The 48-year-old minister has been the pastor for 21 years of the 300-member World Overcomers Family Church in the city’s Fulton community in the East End. He was installed as the chapter president Saturday, Dec. 20, along with other officers.

The state SCLC president, the Rev. William Avon Keen of Danville, took part in the event at Rev. Whitehead’s church.

Rev. Whitehead said the chapter is seeking to return to the SCLC’s origins as a faith-based organization seeking community betterment. He said that 60 people have joined the chapter, which plans to hold its first meetings in January.

Among other things, he said, the chapter will focus on relations with police. “We are planning to meet with the police chiefs of Richmond, Henrico, Chesterfield and Hanover counties to talk about improving relations between the police and our community.”

He said too many people in the Richmond area have had experiences that “raised fear and concern and created hostility. You don’t have to go to Ferguson, Mo., or New York to hear about problems in this area.”

He said the purpose of the meetings will be to find out why police feel threatened by some individuals, and what people need to do if they are pulled over.

“We are not anti-cop,” Rev. Whitehead said. “We want to discuss the problems and see how they can be addressed.”

He said the James River SCLC chapter also wants to focus on voter education and to scrutinize the records of elected officials to ensure they are living up to their campaign promises.

“We also want to deal with issues involving fair wages and raising the minimum wage,” he said, and to help educate voters about those running for office. “We want to scrutinize candidates carefully so we do not just vote for people just because some group endorsed them.”

Other officers installed with Rev. Whitehead include the vice president, Pastor Uzziah A. Harris. He is the council liaison for 9th District Councilwoman Michelle R. Mosby.

This is the SCLC’s second Richmond area chapter. The first, known as the Richmond Chapter, has ties with Wesley Memorial United Methodist Church in the East End and the United Food and Commercial Workers Local 400.