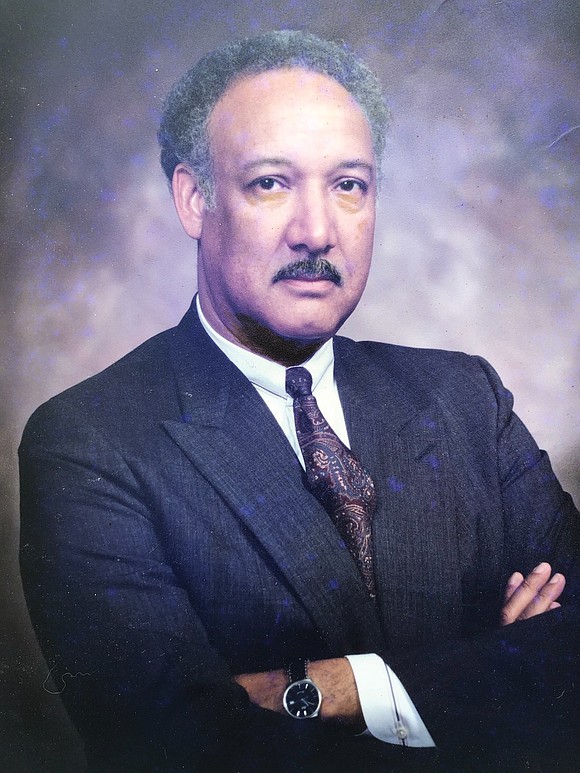 Dr. Earl Hampton McClenney Jr. left his mark on public administration in Virginia as an educator and as a Richmond and state official where he fought entrenched racism and sought to aid the underdog.

For 26 years, Dr. McClenney taught students about the importance of public policy and government as a professor and as chair for two decades of Virginia State University’s Department of Public Administration that he launched.

“He wanted the next generation to be prepared to open doors for others and to face adversity head on,” said his older daughter, Dr. Madeline G. McClenney, a minister and leader of a nonprofit in Charlotte, N.C., that aids former prison inmates.

She said her father would always tell her and her sister, Richmond General District Court Judge Jacqueline S. McClenney, and the students he mentored, “You have to play the hand you’re dealt and always look out for those less fortunate.”

When Dr. McClenney arrived at VSU in 1981, he brought experience in battling for fairness and equal opportunity in government.

In 1965, newly graduated from North Carolina A&T State University where he roomed with civil rights activist Jesse Jackson Sr., Dr. McClenney and his wife, Frances W. McClenney, moved to Richmond where he became the first African-American hired to work in the previously all-white personnel office at City Hall.

“With jeremiad tones and righteous anger, he often recounted stories at the dinner table and later to his students regarding the entrenched, systematic racism at City Hall at that time,” his daughter said.

Dr. McClenney forced the personnel department to stop marking the applications from African-Americans with a “B” and throwing them out, his daughter said, adding “he also stopped the practice of white secretaries making loud noises in an attempt to distract Black applicants who were taking employment tests.”

He would later author a now classic guide, “How to Survive When You’re the Only Black in the Office: What They Can’t Teach You at White Business Schools.”

“He risked criticism throughout his career,” Dr. Madeline McClenney said, but he would say, “I have no control over what other people think. My job is to defend those in weaker positions and to do the right thing.”

A lanky 6-foot-3 with a distinct stutter, Dr. McClenney would rise to leadership in a state planning agency, serve as a consultant to local, state and federal agencies, secure appointment to various city and state policy boards and committees and become a top adviser to then-Gov. Tim Kaine, now a U.S. senator.

Dr. McClenney’s wide-ranging career and willingness to stand up for African-American interests are being remembered following his death in a local hospital Thursday, Aug. 20, 2020. He was 79. His daughter said his death resulted from complications from an illness he had battled for years.

Born in Raleigh, N.C., Dr. McClenney grew up on the campus of now defunct St. Paul’s College in Lawrenceville, where his father served as president and his mother was the librarian.

He learned about overcoming adversity in dealing with a stutter that was so bad he was embarrassed to speak as a youth. It remained unresolved until he learned to play the jazz saxophone. He would always tell people that music was his speech therapy.

Educated at a campus high school and at the Lenox School in Massachusetts where he founded and led a jazz band, he went on to earn his bachelor’s degree at North Carolina A&T. He later earned a master’s in public administration from the University of Virginia and a law degree from the University of Richmond Law School, adopting the title doctor from the degree.

While he never practiced law, he served for 30 years as an administrative law judge for the Virginia Employment Commission where he heard appeals of denials of unemployment claims.

He worked for the City of Richmond for five years, but left after he was denied promotion, his daughter said.

In 1969 while earning his master’s degree, Dr. McClenney applied for and was appointed by then-Gov. Mills E. Godwin Jr. to a state internship. He later went on to lead human resources planning in the state Division of Planning and Community Affairs and then became associate director a year later.

While in state government, he recounted in his résumé that he managed, supervised and coordinated the state’s Model Cities program, Economic Opportunity Program, the Community Action Program, the Virginia Office on Aging and the state Office of Volunteerism.

He also was involved in interagency planning for 15 state agencies and in over-seeing a statewide service delivery incentive fund, becoming an expert in federal and state regulations.

After leaving state employment, Dr. McClenney joined VSU as chair of the newly created Department of Public Administration. He led the department until 2001, when then-VSU President Eddie N. Moore Jr.—with whom Dr. McClenney repeatedly clashed, according to published reports at the time—merged the department into the Political Science Department, led by another faculty member.

Still, Dr. McClenney continued to teach six more years and remained deeply involved with VSU. During his 26 years, he served on more than a dozen policy committees dealing with everything from the curriculum and the faculty handbook to student orientation and strategic planning. He also served as an adviser to foreign students and freshmen and chaired the Faculty Senate for 10 years.

Outside the classroom, he engaged in consulting work on diversity and management for Richmond, Petersburg and other localities and state agencies, the Central Intelligence Agency, the government of Kuwait and the U.S. foreign aid program in Costa Rica.

In 2007, he took a leave from VSU after Gov. Kaine named him his senior adviser for urban affairs and never returned after the appointment ended.

Dr. McClenney’s schedule was always full. He served on the board and executive committee of Richmond Renaissance, now Venture Richmond, and also was involved in starting and operating the Leadership Roundtable Foundation to train future African-American leaders.

He was a past vice chair of the board of the U.Va. Institute of Government and served on the boards of the Richmond Community Development Corp., Homebase Inc., the Richmond Jaycees and the Richmond Branch NAACP. He was a member of Omega Psi Phi Fraternity.

He was a longtime member of Riverview Baptist Church, where he served as vice chair of the board of trustees. He also joined First Baptist Church of South Richmond in 1995.

Dr. McClenney also was an avid hunter and patron of the Richmond Ballet.