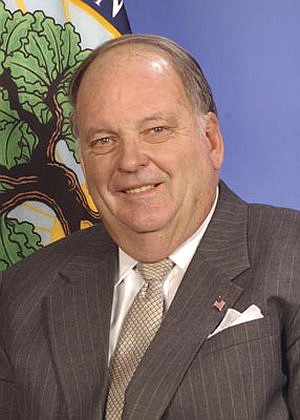 Former Virginia Lt. Gov. John H. Hager, a Republican and former tobacco executive who served from 1998 to 2002, has died at the age of 83.

Mr. Hager presided over a state Senate that was under GOP control for the first time in more than a century. As lieutenant governor, he served as the top state security assistant to GOP Gov. Jim Gilmore following the Sept. 11, 2001, terrorist attacks and continued in that role after he left office in January 2002 under newly elected Gov. Mark R. Warner, a Democrat.

He later became an assistant secretary in the U.S. Department of Education under President George W. Bush.

“The father of Henry, our son-in-law, was a great man and a great friend to our family,” the former president said in a statement.

“He was active and joyful, a wonderful father, and a loving grandfather to his five grandchildren,” former President Bush added. “Laura and I send our heartfelt condolences to John’s dear wife, Maggie, and to sons Jack and Henry and their families.”

Originally from North Carolina, Mr. Hager survived contracting polio as an adult and made campaign stops in a wheelchair. He was known to be an avid wheelchair racer.

He also briefly served as chairman of the Republican Party of Virginia. Former Gov. Warner, who is now represents Virginia in the U.S. Senate, said in a statement that Mr. Hager was able to overcome challenges to serve Virginia. “John was a great Virginian, who, despite the remarkable obstacles he faced in his personal life, was able to persevere and give back to his community,” Sen Warner said.

“Anyone who worked in Virginia politics quickly learned that John was everywhere, and no one outworked him,” Gov. Northam said. “He earned victory and knew defeat, and he kept going. John held fast to his principles, and he knew when to reach across the aisle to compromise. Our country misses his example.”

Lt. Gov. Justin E. Fairfax, a Democrat and second African-American to be elected to the state’s second highest office in the commonwealth’s history, said Mr. Hager dedicated much of his life to “bringing people together and lifting us all to higher, common ground.”

“I personally will miss his tremendous warmth, optimism and generosity of time and spirit. John always made himself available to help others and freely share his signature wit and wisdom.

“As lieutenant governor, I have treasured John’s impeccable advice and the eloquence of his example in leadership and in life. He turned life’s obstacles into opportunities and its tragedies into triumphs — always focusing on the future and inspiring all those he met along the way.