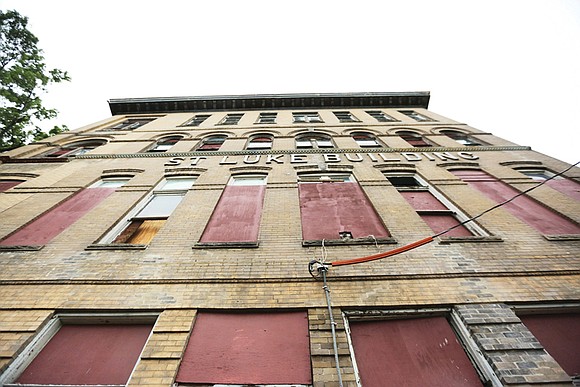 The historic 117-year-old office building in which Richmond business great Maggie L. Walker launched a bank and led a crusade for African-American economic independence has been renovated into an apartment building that is ready to welcome its first tenants.

The final touches are being applied to the St. Luke Building at 900 St. James St., the former home of the Independent Order of St. Luke, a fraternal society and burial insurance group that Mrs. Walker revived and led into the areas of banking, publishing and retailing.

Dodson Property Management of Richmond already is showing some of the units to potential renters.

Mrs. Walker led the construction of the order’s headquarters building in relocating the organization to Richmond. She also started the St. Luke’s Penny Savings Bank in the building in 1903, becoming the first African-American woman in the nation to charter and run a financial institution

While relatively small compared to apartments planned elsewhere in the city, the development is big for the Gilpin Court area that lies north of Interstates 95 and 64 that dissected Jackson Ward in the 1950s and is best known for the public housing community that has been its most prominent feature since the early 1940s.

The idea of development in this area has essentially been a nonstarter for decades, until now.

While at least one other apartment project is in the works nearby, St. Luke Building owners Wanda and Margaret Stallings are taking the lead in showing what can be done, with hopes others will follow. Beginning in 2017, they joined with attorney and developer Charles Ayers Jr. of River City Ventures to convert the four-story building into 12 apartments, with two more in an annex building next door. The cost was pegged at about $3.6 million.

Mr. Ayers said the first floor of the historic building is reserved for commercial space in which he said there has been substantial interest.

He said there also are talks about installing a community day care center in the final piece of the project, a vacant two-story home at the corner of St. James and Charity streets that long ago housed the state’s first post-Civil War orphanage for African-American children.

“Our goal has been to revive this area along with Maggie Walker’s vision of empowerment for our community,” said Wanda Stallings, whose family has owned the St. Luke Building and associated property for nearly 50 years. “This shows what can be accomplished and lays the foundation for a new day for this community.

“Where others see poverty, blight and decay, we see an opportunity to create a brighter future for the residents who make their home here and for our city,” said Ms. Stallings, daughter of the late James R. Stallings Sr., who bought the building from the declining St. Luke group in 1971 and amassed other properties around it as well as in Jackson Ward.

The proposed rents represent a sea change, ranging from $800 a month for an efficiency to $1,750 a month for a two- bedroom, two-bath unit, Mr. Ayers said.

Although the renovation has taken nearly three years, the Stallings-Ayers group is now far ahead of Richmond Redevelopment and Housing, which controls the bulk of the property in Gilpin Court and has bought up most of the remaining private holdings other than those owned by the Stallings and the family of the late Dr. Benjamin J. Lambert III, who maintained an optometry practice in Gilpin Court for several decades.

A few years ago, RRHA talked about transforming the public housing area into a mixed-income community, but that effort has long stalled as the city put priority on overhauling the Creighton Court public housing community in the East End.

For the past five years, RRHA’s biggest project for Gilpin Court has involved replacing a 200-unit Fay Towers high rise for the elderly nearby at 1st and Hill streets. Currently, a nonprofit partner is completing the second phase of that work with a 154-unit complex a few blocks south at 1st and Duval streets.

The final phase would involve the renovation of the former Baker School into 51 apartments located two blocks west of the St. Luke Building, but that work has yet to begin.

The Stallings still own several blocks and a total of 5 acres near the St. Luke Building that they are eyeing for future development.

Still, getting the St. Luke Building done proved a test of patience and stamina. Wanda Stallings and Mr. Ayers struggled to get initial approvals and were forced to spend more on unplanned items that the city required to gain needed permits.

While at least one issue involving property taxes remains unresolved, Mr. Ayers said the atmosphere and relationship with the city has improved. He said the building recently received the occupancy permits that allow units to be leased.