Plans shape up for developments in Gilpin Court area 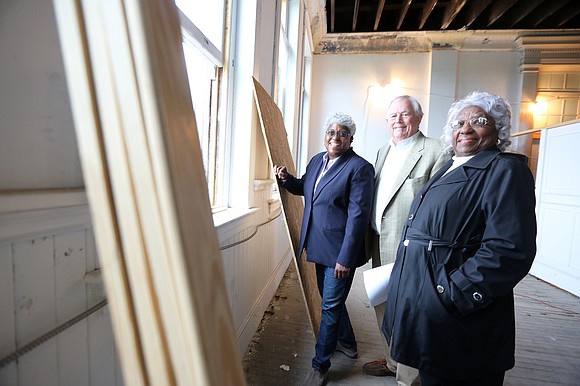 The Stallings family is preparing to go even bigger on developing its property in Gilpin Court, which lies north of Interstate 95 in Downtown and is best known for the public housing community.

Fresh from completing apartments in the four-story St. Luke Building at Baker and St. James streets where Maggie L. Walker ran a nonprofit insurance and business operation, the Stallings family is now focusing on its next steps in partnership with lawyer-developer Charles Ayers Jr. of River City Ventures.

The partners are now completing renovation of the first floor of the St. Luke Building for a mental health services company that plans to move from Jackson Ward into the space.

Wanda Stallings, who has been leading the family’s development with her mother, Margaret, and Mr. Ayers, said the next project would involve restoring a historic building at Charity and St. James streets into a day care center. The building once was home to the area’s first orphanage for black children.

She said a child care operation already has signed to secure the space once the renovation is complete.

The projected $16 million development, which Ms. Stallings hopes can be underway within a year, would add to the 12 apartments the partnership developed in the St. Luke Building and two others that were developed in an adjacent annex building.

Despite facing repeated City Hall roadblocks and barriers over the St. Luke project, Ms. Stallings remains optimistic about the prospects for this section of the city that others had largely written off.

Nearby on Baker Street, the Richmond Redevelopment and Housing Authority, which remains stalled on plans to redevelop the Gilpin Court public housing community, is moving forward with a nonprofit partner to redevelop an old elementary school. The school will have 51 apartments under the plan, which is the final phase of RRHA’s effort to replace the 200-unit Fay Towers senior high-rise located at 1st and Hill streets.

Ms. Stallings noted that others are buying property on 2nd and 3rd streets that ultimately could add new development.

“Change is happening,” she said.

The city, itself, has included in its proposed new master plan an idea spearheaded by 2nd District Councilwoman Kim B. Gray—installing a wide pedestrian bridge across the interstate west of 1st Street to better connect Jackson Ward and Gilpin Court. A former pedestrian bridge was removed decades ago.

Richmond already has a model of what can be done; the Kanawha Plaza park was built over the Downtown Expressway.

Though unfunded, the new pedestrian bridge as envisioned potentially would be large enough to have apartments, retail shops and a park, Ms. Gray said.

“Creating a bridge park is something other cities have done,” she said, calling it a potential boon for the area.