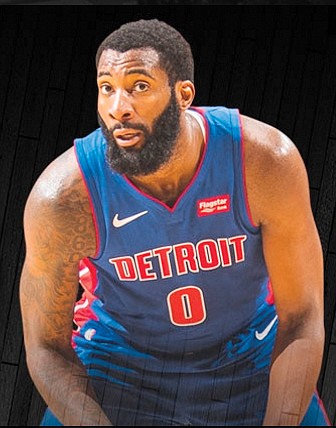 Andre Drummond is building a case to be recognized as the NBA’s top rebounder of the 21st century.

The bruising 6-foot-10, 280-pound Detroit Pistons center has won the rebounding title three of the past four years and is well on his way to making it four of five.

After 30 games this season, the 26-year-old native of Mount Vernon, N.Y., was averaging 15.9 rebounds per contest. That’s well ahead of second place Clint Capela, averaging 14.4 for the Houston Rockets.

Here’s how he described his success to the Hartford Courant newspaper: “I want it more. That’s all it is,” he said of the physical battles under the backboards. “Nobody wants to get hit every possession going for the rebound, but I do.”

Drummond’s 16 rebounds-per-game norm in 2018 was the best since the Chicago Bulls’ Dennis Rodman won the title with 16.1 rebounds per game in 1997.

Wearing jersey No. 0, Drummond is more than just a rebounder. He averages 18 points and two blocked shots a game, while hitting 56 percent from the field.

His weakness is clearly the foul line, where he has connected on just 46 percent for his career.

“I think I’m the best (rebounder) of all time,” he told The Detroit News. “I don’t think anyone is remotely close to me.”

The big fellow may need to check the record book regarding that boast, however.

However, in fairness to Drummond, Chamberlain had more opportunities.

The two-time, All-Star Drummond is making $27.5 million this season in the final year of his current contract. He becomes a free agent at the end of this season. Drummond played just for his freshman season at the University of Connecticut before opting for the NBA draft. He was selected ninth overall by Detroit. While his “best ever” claim may seem far-fetched now, he likely has another 10-plus seasons to keep adding to his rebound collection.

Whatever the final tally, anytime a player is in same conversation with Wilt Chamberlain, he’s on the fast track to the Naismith Memorial Basketball Hall of Fame.