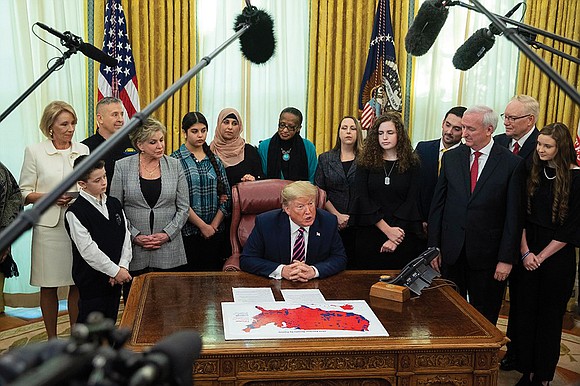 President Trump speaks last week during an event on prayer in public schools in the Oval Office of the White House. Photo by Evan Vucci/Associated Press

President Trump, surrounded by schoolchildren of a variety of faiths, announced what he called “historic steps to protect the First Amendment right to pray in the public schools.”

Within hours of senators being sworn in for President Trump’s impeachment trial, the president and nine federal agencies on Jan. 16 made moves they said would support the rights of religious people, including students who report their freedom to pray has been violated.

“In public schools around the country, authorities are stopping students and teachers from praying, sharing their faith or following their religious beliefs,” said President Trump, sitting behind the Resolute Desk of the Oval Office in an event carried online via C-SPAN. “It is totally unacceptable. You see it on the football field. You see it so many times where they’re stopped from praying, and we are doing something to stop that.”

U.S. Education Secretary Betsy DeVos, standing near the president, said her depart- ment’s new guidelines, which highlight “constitutionally protected prayer,” require state agencies to inform it when complaints are filed about limitations to the free exercise of religion.

“Too many misinterpret a separation of church and state as an invitation for government to separate people from their faith,” Ms. DeVos said. “In reality, our Constitution doesn’t exist to protect us from religion; it exists to protect religion from government.”

Daniel Mach, director of the American Civil Liberties Union’s Program on Freedom of Religion and Belief, said the Education Department’s guidance about school prayer is very similar to language that has been in place since 2003 when issued by then-President George W. Bush.

“Importantly, both the Bush guidance and the copycat document released today affirm a core constitutional protection: School officials are prohibited from imposing their faith on students,” Mr. Mach said. “The question, as always, is whether public-school officials will heed this warning. If they don’t, we’ll be there, as always, to correct them — and if necessary, we’ll see them in court.”

In addition to the school prayer-related announcement, the administration said it had plans to remove the require- ment that faith-based social service providers offer a secular alternative to people seeking their assistance.

Americans United for Separation of Church and State said such a rule would hurt many who receive services such as housing assistance, substance abuse treatment and vocational training.

“These rules undermine the civil rights and religious freedom of millions of our most vulnerable Americans who rely on social services — with particularly dire consequences for LGBTQ people and religious minorities,” said Rachel Laser, president and chief executive officer of Americans United. “No one should be denied the help they need because their government-funded provider condemns who they are, who they love or what they believe.”

Melissa Rogers, former head of the White House Office of Faith-based and Neighborhood Partnerships, likewise opposed the proposed changes that affect those who could be aided by religious social services.