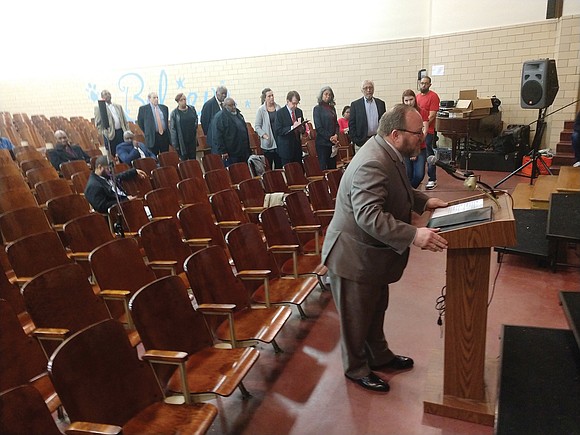 Fifteen of the roughly 20 audience members backed naming the new elementary school under construction next to the old George Mason building in honor of the 86-year-old Mr. Marsh, an alumnus of the school who went on to become Richmond’s first African-American mayor and to represent Richmond in the state Senate from 1992 to 2014.

“He promoted social justice, public education and civil rights along with all of the things we want our young people to know are important,” his daughter, Nadine Marsh-Carter, said in a Free Press interview following her remarks to the board.

“I think it is really important for the next generation that gets to enjoy a beautiful new facility to have the sense of pride that comes from knowing the school is named after someone who attended George Mason ... and who was able to overcome odds to become a leader.”

Like many other Marsh family members, Ms. Marsh-Carter also attended George Mason Elementary as a youth. She lives in the city’s 7th District, where the school is located, and previously represented the district on the School Board.

The board has begun the renaming process for Amelia Street School in the city’s West End and for the new George Mason and E.S.H. Greene elementary schools under construction, as well as the new middle school being built on Hull Street Road in South Side. The new schools are scheduled to open this fall.

While several names for the new buildings were suggested during an initial public hearing on Jan. 6, the overwhelming favorite name at Monday night’s meeting was Henry L. Marsh III.

Among the speakers offering high praise for Mr. Marsh and supporting a school named in his honor was Ben Ragsdale, who grew up in the small, conservative town of Waverly in the 1960s and backed the Civil Rights Movement.

“Henry handled litigation that had an unmatched impact on school desegregation across the country,” Mr. Ragsdale said of Mr. Marsh, who handled more than 50 lawsuits involving school desegregation in the decades after the landmark 1954 U.S. Su- preme Court Brown v. Board of Education decision outlawing the doctrine of “separate but equal.”

He also successfully litigated numerous employment discrimination cases and was involved in a lawsuit that forced the Virginia General Assembly to adopt single-member districts, which has led to the election of more African-American and minority candidates.

“Henry helped to make America a place, though far from perfect, that is now radically more fair and where there is radi- cally more opportunity than ever before,” Mr. Ragsdale said.

A public hearing focusing on the renaming of Amelia Street School will be held at 6 p.m. Monday, Feb. 3, at the school, 1821 Amelia St.

The School Board is to vote on new names for the four schools at its meeting on Feb. 18.