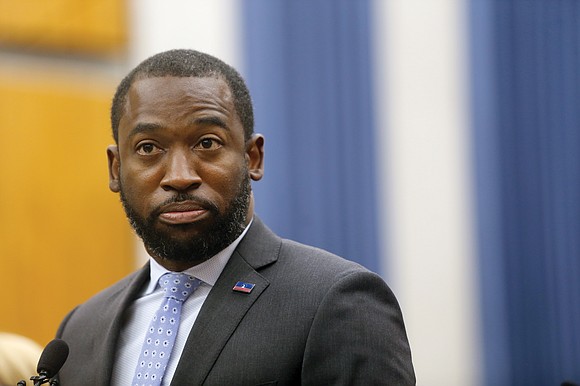 Incumbent Mayor Levar M. Stoney is the front-runner in the race for the city’s top elected office, with 2nd District Councilwoman Kimberly B. “Kim” Gray running a close second in the seven-way race, according to an independent poll of the Richmond contest.

Bidding for a second, four-year term, Mayor Stoney was the favorite of 36 percent of registered voters and appeared to lead in four of the nine City Council districts, the poll found. The poll showed Mayor Stoney ahead of his competitors in the 4th, 5th, 6th and 7th districts. The next mayor must win a majority in five districts to be elected.

According to the poll, Ms. Gray was the favorite of 31 percent of voters and led in three districts, the 2nd, 3rd and 9th.

Only two other candidates polled in double digits, Alexsis E. Rodgers, who had 16 percent support and was narrowly leading Mayor Stoney in the 8th District, and M. Justin Griffin, who had 11 percent support, but did not lead in any district.

Other candidates in the mayoral contest are Michael J. Gilbert, Tracey V. Mclean and E. Pauron Wheeler. George Banks has dropped out of the race.

In the 1st District in the West End, the poll found Mayor Stoney and Ms. Gray were virtually tied, but 37 percent of the voters were prepared to vote for one of the five other candidates.

“As of today, it appears that Mayor Stoney and Ms. Gray have the best chances to win,” an executive summary of the poll states.

The poll is from the New Hampshire-based American Research Group, which conducted the polling between July 16 and July 21 and released the results on July 23.

The group polled 60 randomly selected registered voters in each of the nine city districts, or a total of 540 people. The group reported that results could vary by 4.2 percentage points.

The Free Press was provided a copy of the results on condition that the individual or group commissioning the poll would not be identified. However, those involved are not connected with any of the campaigns.

The poll found that most people have made up their minds. In eight of the districts, 3 percent of less of those polled were undecided. The 6th District had the largest percentage of undecided voters at 5 percent.

Among poll participants, 55 percent favored removal of the Confederate statues, while 45 percent wanted them to remain.

Separately, 88 percent of those polls opposed raising real estate taxes to provide additional funds to support public schools. Many said they could not support Mayor Stoney if he proposes an increase as he did in 2019.

Of those polled, 79 percent labeled themselves as Democrats, 13 percent were Republicans and 8 percent were independents.