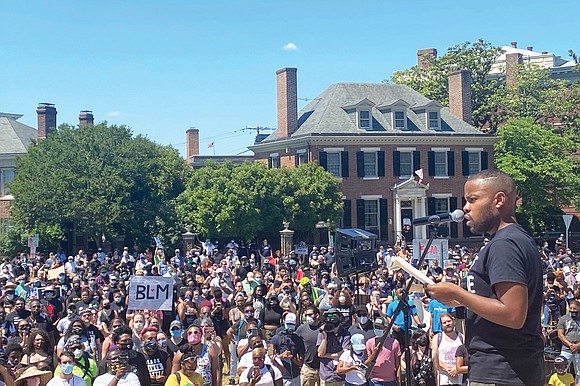 Tavares Floyd of Richmond, council liaison for City Councilwoman Ellen Robertson, speaks at the 5000 Man March last Saturday at the Lee statue about the racial inequities in Richmond and throughout the nation, as well as the “bad apples” within police departments. His cousin, George Floyd, was killed May 25 by a Minnesota police officer, who has since been charged with second degree murder and second degree manslaughter. Photo by Regina H. Boone

Mayor Levar M. Stoney, in promoting the then-interim chief to the top job, described the Richmond native as a “thoughtful, detail-oriented, accountable, compassionate and fair” person who had the right stuff to lead the department “and serve our community with a spirit of inclusivity and equity.” 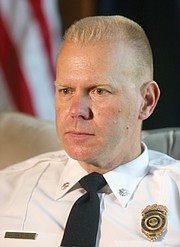 But all that ended Tuesday.

Amid an unprecedented upheaval involving nearly non-stop protests against police brutality and racial injustice, Mayor Stoney on Tuesday dumped Chief Smith like a moldy loaf of bread, referring to him as a roadblock to the progress and reforms in public safety the city needs.

At a hastily called afternoon news conference, Mayor Stoney announced the dismissal of Chief Smith, who has spent 25 years with the department, and the appointment of his chief of staff, Maj. William “Jody” Blackwell, as his immediate replacement as a search for a new chief is conducted. While noting the 52-year-old Richmond native was a “good man” who served the city with grace, Mayor Stoney said Chief Smith no longer met his “high expectations for the Richmond Police Department.”

“At a minimum, I expect (the RPD) to be willing to come around the table with the community to reform and re-imagine public safety,” said the mayor, who is facing a tough re-election campaign this fall against four challengers.

The interim chief, a Marine Corps veteran, also has risen through the ranks during the past 23 years, previously managing the internal affairs department that investigates complaints against officers. Chief Blackwell also has commanded the Fourth Precinct on Chamberlayne Avenue in North Side. 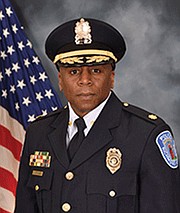 “Interim Chief Blackwell is willing and able to focus on necessary public safety reform, healing and trust building within the community,” the mayor said.

Along with some policy changes, Mayor Stoney promised to work with City Council to develop a community-supported review board.

Mayor Stoney also announced he would create a 20-member task force to re-imagine and recommend changes to “build toward equity and justice. Using a restorative justice framework, we can re-imagine public safety to create a truly safer city for all.”

Ironically, just a few hours after the change, a crowd of about 250 protesters went to the Miller & Rhodes building in Downtown where the mayor lives and chanted his name outside one of the entrances. Someone also tagged the building with graffiti, including “WYA Stoney.”

According to a statement from police, several of the protesters got inside the building, but left peacefully after they were asked by security.

The crowd then marched uptown and tore down another Confederate statute, a memorial to the Richmond Howitzers artillery unit. The statue, near Park Avenue and Harrison Street, stood on the Virginia Commonwealth University campus.

Meanwhile, Chief Blackwell takes over amid continuing unrest and concerns about the potential arrival of heavily armed supporters of the Confederate statues on Saturday, June 20, which raises the prospect of a potential conflict with those seeking to bring the statues down.