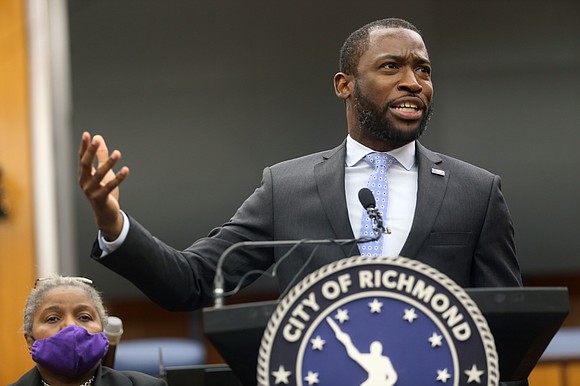 Calls for City Hall to remove the last three city-owned Confederate statues on Monument Avenue before people are injured or killed trying to pull them down appeared to die this week after Interim City Attorney Haskell C. Brown III cautioned that city officials and any contractors hired to do the work could face felony charges.

The issue of emergency action to remove the statues arose after protesters attempted to pull down the statue of Confederate Gen. J.E.B. Stuart at Monument Avenue and Lombardy Street Sunday night. Police thwarted the protesters actions.

Court action continues to block Gov. Ralph S. Northam’s effort to remove the state-owned statue of Confederate Gen. Robert E. Lee on Monument Avenue. But City Council is poised to use its new authority on Wednesday, July 1, to legally remove the city- owned statues of Confederates, including those of Gen. Stuart, Thomas “Stonewall” Jackson and Matthew Fontaine Maury, on Monument Avenue.

Their push came after five other statues have been toppled, including the latest Saturday night at a park on Meadow Street in The Fan that paid tribute to Virginia soldiers who fought in the Revolutionary War. Others ripped down by protesters include the statue of Confederate President Jefferson Davis on Monument Avenue and one of explorer Christopher Columbus in Byrd Park.

In a letter, Dr. Jones and Ms. Lynch wrote the city attorney asking about the legal authority to act under emergency authority.

“Protesters have clearly shown they are willing to take the removal of those statues into their own hands. There is a risk of injury in an attempt to damage or remove the remaining monuments,” they wrote.

But at a council session Monday night, Mr. Brown said he could find no way around the current law that makes it a crimi- nal offense to remove the statues. On July 1, the law changes, allowing localities to make that decision. He said City Council needed to ask Richmond Commonwealth’s Attorney Colette W. McEachin if she would charge people should such emergency removal take place.

During the meeting, council members made no effort to get in touch with Mrs. McEachin. She has not publicly commented.

Mr. Brown also suggested the city seek authority from Gov. Northam to remove the statues under his emergency authority and via an executive order.

However, when asked by Ms. Lynch about emergency authority, Mr. Brown said neither the mayor or his administration has authority under the City Charter or state law to declare a local emergency and that such a declaration would not meet the criteria to remove the statues.

He did not mention the state law on emergencies that allows local officials to declare an emergency with the consent of the governing body.

Meanwhile, Richmond Circuit Court Judge Bradley B. Cavedo last week threw out a lawsuit seeking to block removal of the Lee statue. The suit was filed by a descendant of people who donated the land on which the statue stands to the state.

Judge Cavedo ruled that the descendant, William Gregory, had no rights to the land and thus no right or standing to sue.

Still, he gave Mr. Gregory time to file an amended complaint and set a new hearing for Thursday, July 23, to consider the matter again. Judge Cavedo also extended his temporary injunction blocking removal of the Lee statue until then.