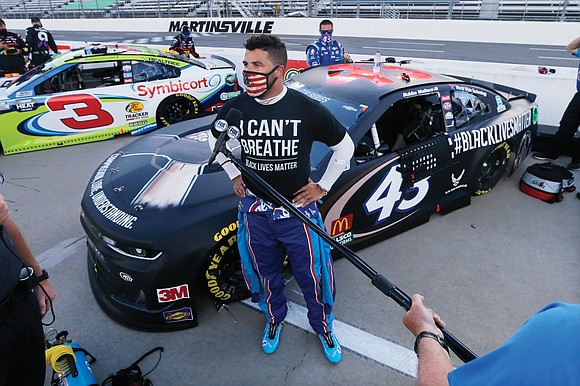 TALLADEGA, Ala. - NASCAR went to Talladega Superspeedway last weekend on heightened alert after Bubba Wallace, its only Black driver, took on an active role in a push for racial equality.

Wallace had successfully called for the ban of the Confederate flag and received threats. Fans paraded past the main entrance of the Alabama track on Sunday displaying the flag, and a plane circled above the speedway pulling a Confederate flag banner that read “Defund NASCAR.”

So NASCAR moved quickly Sunday when one of Wallace’s crew members discovered a rope shaped like a noose in his garage stall. The sanctioning body called in federal authorities, who ruled Tuesday the rope had been hanging there since at least last October and was not a hate crime. 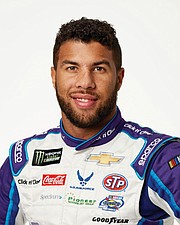 U.S. Attorney Jay Town and FBI Special Agent in Charge Johnnie Sharp Jr. said the investigation determined “nobody could have known Mr. Wallace would be assigned” to that same stall. NASCAR said it was the lone garage stall with a pull down rope that resembled a noose.

NASCAR has defended its reaction and insisted it would call the FBI again. Wallace said there is no confusion and the rope had been fashioned into a noose.

Wallace never saw the rope. He said NASCAR President Steve Phelps came to see him Sunday night at the track with “tears running down his face.”

“The evidence he brought to me was that a hate crime has been committed,” said Wallace, who instantly began to fear for the safety of his family.

Even after the FBI concluded that it was not a hate crime, Wallace remained angry at what he perceives as constant tests of his character. He holds no ill will toward NASCAR.

“I stand behind Steve and I stand behind NASCAR,” he said. “NASCAR was worried about Talladega. We had that one circled on the radar with everything going on.”

Wallace, a 26-year-old native of Mobile, Ala., took center stage at the Martinsville Speedway in Southside Virginia on June 10 when he publicly showed his support of the sweeping global movement calling for an end to police violence and for racial justice by wearing a shirt that read “I Can’t Breathe” over his firesuit. His No. 43 car also sported the words Black Lives Matter.

Wallace said NASCAR assigned him two sheriff’s deputies for security at Martinsville after he called for the ban on Confederate flags. He said in a tweet earlier this week after the noose incident that he has found support among fellow drivers for his stance on banning the flag.

“Our sport has made a commitment to driving real change and championing a community that is accepting and welcoming of everyone,” he wrote on social media. “Nothing is more important and we will not be deterred by the reprehensible actions of those who seek to spread hate.”

On Sunday, NASCAR opened the Talladega gates to 5,000 fans, its highest number so far during the coronavirus pandemic. The first word of the noose came in a sharply worded statement in which NASCAR said it was “angry and outraged” over the “heinous act” that the series directly linked to racism.

The FBI sent 15 agents to Talladega for Monday’s rescheduled race at the same time the industry rallied around Wallace. In an unprecedented show of solidarity, every team member on pit road lined up behind him during the national anthem.

Phelps has taken only nine questions about the finding in Wallace’s garage and none provided any details of the incident. Because of health protocol restrictions, a limited number of per- sonnel had access to the garage. Only a handful of Wallace’s crew members and NASCAR saw the rope.

Roughly 48 hours after the discovery, federal authorities said video confirmed the rope “was in that garage as early as October 2019” hanging from a garage door. The rope was referred to as a noose, but can be used as a handle when closing the door.

Phelps continued to call it a noose after authorities said no charges would be filed, and held firm in that NASCAR is investigating why the rope was tied that way. He was pleased it wasn’t a hate crime directed at Wallace, but insisted NASCAR would have conducted its investigation the same way even now knowing it was just a coincidence.

“We would have done the same investigation. It was important for us to do,” he said.

“The evidence was very clear that the noose that was in the garage was in there previously. The last race we had in October, that noose was present. The evidence we had, it was clear we needed to look into this,” Phelps said.

He took no questions on the FBI’s findings.

Meanwhile, another racing team, Wood Brothers Racing, said it cooperated with the investigation and an employee recalled “seeing a tied handle in the garage pull down rope from last fall,” when that team had the stall.

The noose discovery stunned the stock car series as it takes an active position in a push for inclusion.

Five years ago, former NASCAR chairman Brian France tried to ban flying Confederate flags at tracks, a proposal that was not enforced and largely ignored.

NASCAR has yet to detail how it will answer Wallace’s call to stop the display of the flag.

In other sports, the NCAA last Friday expanded its policy banning states with prominent Confederate symbols from hosting its sponsored events, one day after the Southeastern Conference made a similar declaration aimed at the Mississippi state flag.

The current NCAA ban, in place since 2001, applies to what the NCAA calls predetermined sites, such as for men’s basketball tournament games.

Mississippi is the only state currently affected by the policy. The expanded ban — supported by all eight public universities in the state — means that even when sites of NCAA events are determined by performance, as they are in baseball, women’s basketball and softball, Mississippi schools will not be permitted to host.

“We must do all we can to ensure that NCAA actions reflect our commitment to inclusion and support all our student- athlete. There can be no place within college sports where any student-athlete is demeaned or unwelcome,” NCAA President Mark Emmert said.

“Why did the NCAA not take this position years ago?” said Ellen Staurowsky, sports management professor at Drexel University and author of “College Athletes for Hire.” “To me it means the NCAA has taken a step, but it certainly does not exempt them from examining deeply the institutional racism that exists in its own industry.”

Dr. Staurowsky noted as the NCAA and college sports join the fight for racial equality, they are simultaneously lobbying Congress for protection for its amateurism rules that prevent athletes — the majority of whom are Black in revenue-generating football and basketball — from earning money on the free market.

“To take a stance on the Confederate imagery associated with the Mississippi flag, but not to dismantle amateurism, it speaks to a disingenuousness that should not be supported,” she said.