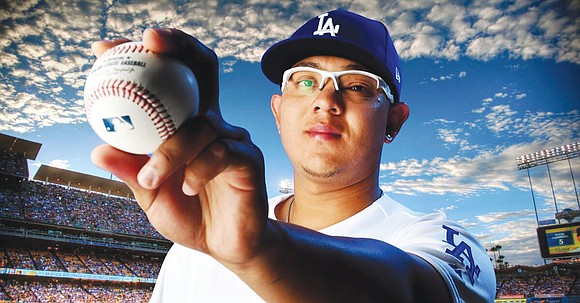 Now that baseball’s craziest season is over, historians will be discussing the Los Angeles Dodgers’ triumph in the 2020 World Series for many decades to come.

Let’s get the conversation started.

Pandemic: The Major League Baseball season normally starts in April but was delayed until August this year because of the coronavirus. Instead of 162 games, teams played 60 games.

To avoid human contact, pitchers took their own resin bags to and from the dugout. First base coaches carried hand sanitizer. Umpires and some players wore masks. Broadcast teams operated away from stadiums.

The regular season was reduced to “regional scheduling” to avoid long flights. Neutral sites were used for the final three rounds of the playoffs.

There was no stadium attendance until the final two rounds of the playoffs, and then it was very limited. Cardboard cutouts replaced fans in the stadiums in most cases.

Long time coming: While the Dodgers have been among baseball’s elite, the team’s last World Series title was in 1988, thus the tag “The Curse of ’88.”

After defeating the Tampa Bay Rays 3-1 on Oct. 27 to clinch the World Series in Game 6, the Dodgers’ website declared “The Curse of ’88 has been kicked out of the gate.”

Finally! The Dodgers’ Clayton Kershaw is arguably the best pitcher of his era, but had an oft-told story of postseason failures. That all changed this autumn as the three-time Cy Young winner was dominant—twice beating the Rays in Series.

It is fitting that Kershaw’s fondest moments came in Arlington, Texas, just a long fly ball from his hometown of Dallas.

Tall-stop: At 6-foot-4, Corey Seager is among the game’s tallest shortstops. The left-handed swinger won both NL Championship and World Series MVPs, stroking eight homers and driving in 20 runs in the postseason.

Mookie Magic: Acquired from Boston in the offseason, Mookie Betts dazzled with bat, glove and on the bases throughout the season.

He saved some of his best for last, scoring the go-ahead run in the fifth inning of Game 6 and then adding to L.A.’s cushion with an eighth-inning homer.

Julio down by the schoolyard: Minus Paul Simon vocals, Julio Urías was a dramatic hit on the mound for Los Angeles. Signed at age 15, the now 24-year-old Mexican lefty closed out both the NL title against Atlanta and the World Series finale with flawless work. He whiffed the Rays’ Willy Adames for the final out.

Urías has undergone four operations on his left eye for removal of a benign mass and cosmetic enhancement.

He told the media: “That’s how God works. He gave me a bad left eye but a good left arm.”

Cuban Rocket: A sensation throughout the playoffs was the Rays’ slugging outfielder Randy Arozarena. After missing the season’s start after testing positive for COVID-19, the Cuban native earned his stripes in the postseason, slugging 10 homers, including one in Game 6, giving Tampa Bay its early lead.

Hero in the dugout: L.A. manager Dave Roberts, one of just two current African-American managers, ranks with the best skippers ever. Roberts’ .614 career winning percentage is second on the career list behind only Joe McCarthy, .615, who managed three different teams, the Chicago Cubs, the New York Yankees and the Boston Red Sox, between 1926 to1950. Roberts is 436-274 in the regular season and 35-27 in playoffs.

The only other African-American manager, Dusty Baker, led the Houston Astros to the American League finals before losing in seven games to the Rays.

Hard to believe finish: Dodgers veteran third baseman Justin Turner was mysteriously removed from the game and dugout in the seventh inning of Game 6. The national television audience had no idea what had happened.

It wasn’t until afterward that it was reported that Turner was taken out because of a positive COVID-19 test. The hard-hitting redhead didn’t play anymore but did participate in a celebratory post-game scene wearing a mask.

Had Tampa won Game 6, no telling what ruling might have been made for Game 7 because Turner had been in close contact with all of the Dodgers players and staff.

A two-week postponement? Quarantines? A forfeit?

In 2020, anything would have seemed possible. 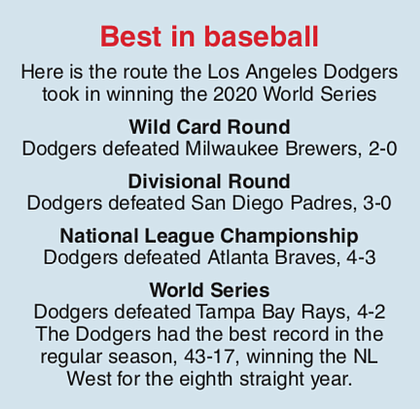