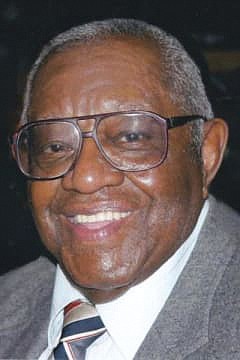 Under the banner of Baker & Dyson, the two specialized in painting and wallpapering homes. They also did plastering, Sheetrock and carpentry work.

“They were known for their honesty, integrity and work ethic,” said Walter E. Baker Jr., who remembers his dad starting him as a summer laborer when he was 13. The team also included Mr. Dyson’s son, retired city firefighter Lynwood M. Dyson Jr.

“He taught me the value of hard work, being on time, keeping your word to customers, living with the quoted price and going back to deal with a complaint without charging extra,” said Mr. Baker, a retired employee of Dominion Energy.

The elder Mr. Baker, whom friends called “Doc” or “Froggie,” retired around 1992. The business closed within two years after the later retirement of Mr. Dyson, who died in 2006.

His family celebrated his life during a private graveside service Friday, Oct. 2, in Woodland Cemetery, where he was buried beside his wife of 57 years, Sarah James Baker, who died in 2008.

Born in Richmond in 1927, two years before the stock market crash in 1929 that led to the Great Depression, Mr. Baker grew up in the Navy Hill neighborhood as Mr. Dyson did.

Mr. Baker graduated from Maggie L. Walker High School in 1948 where he learned the painting trade in vocational classes in which Mr. Dyson earlier also gained his initial training. The two became partners around 1949 after Mr. Dyson returned from serving in World War II and started a company, family records indicate.

Mr. Baker joined the Marine Corps after the Korean War began. He served two years on active duty and later continued in the Marine Corps Reserve, but his son said he did not see combat in Asia. “He served overseas in nine countries,” his son said, including on Navy ships in the Mediterranean.

Mr. Baker resumed the partnership after being discharged from active service and worked until his retirement in 1992 when he turned 65.

In addition to his son, survivors include his brother, Roy M. Baker of Henrico County; two grandsons; and a great-grandson.