Virginia State University has taken a monumental step honoring the achievements of African-American women with ties to the school.

The university has renamed four of its buildings after women who, since the late 1800s, have made remarkable contributions to the school—Lucretia Campbell, Johnnella Jackson, Otelia S. Howard and Lula Johnson.

The VSU Board of Visitors voted to drop the buildings’ previous names because they honored individuals “whose past beliefs were not consistent with the beliefs and legacy of Virginia State University,” officials said. They were white men who were linked to the Confederacy or Jim Crow.

The new names are a major change for the university that was founded March 6, 1882, when the state legislature passed a bill to charter Virginia Normal and Collegiate Institute.

“This is a fantastic thing,” VSU President Makola M. Abdullah said shortly before the unveiling ceremony on campus Aug. 6. “The university had an opportunity to name the buildings after giants that helped in building Virginia State. As students return to campus, they may not initially appreciate the new names’ relevance today, but they will as they learn more about the legacy of Virginia State.”

The buildings and their new names:

Lula Johnson Hall, formerly Vawter Hall, is named for the first Black woman to graduate from the university when it was Virginia Normal and Collegiate Institute. Ms. Johnson is believed to be the first woman to graduate from a Virginia public college. She attended Virginia Normal and Collegiate Institute in the 1890s and became a teacher in Southampton County.

Lucretia Campbell Hall, formerly Eggleston Hall, a dormitory, is named for the first Black woman to serve on the university’s faculty. A Petersburg resident, she graduated from VSU in 1896. After returning to the university, she trained future teachers. 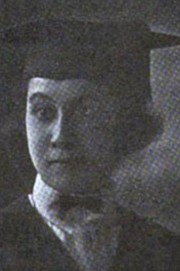 Otelia Shields Howard, from a 1921 graduation photograph in “The Crisis.”

Otelia S. Howard Hall, formerly Byrd Hall, is named for the Petersburg native who served for more than two decades as a professor, adviser and a charter member of two organizations on campus. She taught at Virginia Normal and Collegiate Institute, then attended Fisk University, where she earned a bachelor’s in English with high honors in 1921 followed by a master’s from Columbia University in 1926. She was a charter member of VSU’s graduate chapter of Alpha Kappa Alpha Sorority and founded the school’s newspaper, the Virginia Statesman.

Dr. Abdullah said alumnae, in particularly, will be proud when they return to campus and see the new names.

The renaming, which started five months ago, was approved by the VSU board after a submission by a committee made up of faculty, staff and the university historian Lucious Edwards. They said renaming the buildings would help ensure the campus environment reflects the institution and is a source of pride for all who live and work inside those buildings.

Dr. Edwards said the original names were the footprints of systemic racism and a male-dominated society. The new names reflect the history and mission of VSU.

Vawter Hall was named for Confederate Capt. Charles E. Vawter of West Virginia, a rector at VSU and a state legislator. The structure, built in 1908, is the second oldest on the campus in Ettrick and has served as a residential facility and now is used for academics.

Eggleston Hall was named for Dr. Joseph D. Eggleston, a former member of the VSU Board of Visitors who served as Virginia’s first state superintendent of public instruction, but he did little to advance the education of Black students during his tenure.

Trinkle Hall, a dorm-turned-administration building, was named for former Virginia Gov. E. Lee Trinkle. He was known for signing the Racial Integrity Act of 1924, which prohibited interracial marriage and promoted the purity of the white race.

Byrd Hall was named for former Harry F. Byrd Sr., a former Virginia governor, U.S. senator and leader of the infamous Byrd Machine than ruled state politics for much of the 20th century. He championed Massive Resistance against the landmark 1954 U.S. Supreme Court decision ordering the desegregating of public schools.

Under a blue VSU canopy fronting the newly named Johnson Hall, Dr. Abdullah told the crowd of more than 30 people, “As a historically Black university, VSU has always set the tone of celebrating those who came before us to create the legacy that we have today. Greater happens here.”