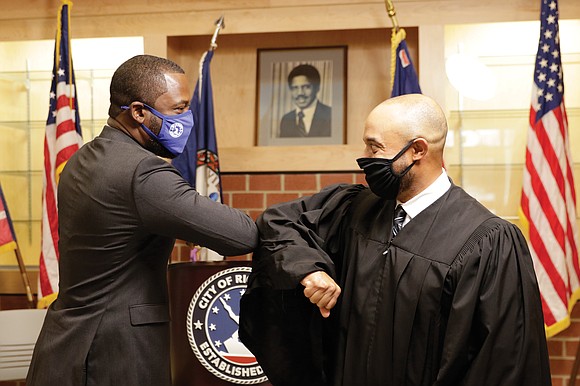 Mayor Levar M. Stoney promised to listen more, engage the community in developing initiatives and push for “justice and equity” as he was sworn in Monday for a second four-year term.

Describing 2020 as a “year of reckoning” that put racial justice issues on the front burner as the city, state and country battled a pandemic, the mayor called 2021 a year in which to begin “reconciliation” and put the city put on a path for creating policies and practices that promote social and economic justice.

With the removal of the racist Confederate symbols from city property, the mayor said that his focus would be the work of transforming the former capital of the Confederacy into the “capital of compassion.”

Long on ideals and short on specifics, Mayor Stoney delivered his remarks after Judge Kevin Duffan, a college friend of the mayor’s and first African-American judge on the Virginia Beach Circuit Court, administered the oath of office.

The city streamed the noon ceremony held at the new Henry L. Marsh III Elementary School in Church Hill, one of the three new schools built during his first term.

Only a few people were allowed in, including City Council President Cynthia I. Newbille, who represents the area. Others included Chairman James M. Nachman and Vice Chair Joyce K. Smith of the Richmond Electoral Board, who presented the mayor with a framed certificate of election.

“Richmonders want — moreover they deserve — more than the status quo,” Mayor Stoney said after touting some of the successes of his first term, including repaving 500 lane miles of city streets and filling more than 80,000 potholes.

“We have a lot of work ahead of us if we want to build a city that meaningfully reflects the lessons learned not only in 2020, but also throughout centuries of our unique, tumultuous history,” he continued.

“We must fill the potholes, pave the streets, pick up the trash and issue the permits on time,” he said, noting that City Hall must do more to improve service delivery.

“But my priority will always be serving as a champion of Richmonders burdened by generational poverty.”

Asked for specifics at a media briefing after the event, Mayor Stoney spoke of some unspeci- fied internal changes he wants to make at City Hall but offered little more. He is expected to offer details when he presents his State of the City speech later this month.

Elected with less than 40 percent of the vote, Mayor Stoney acknowledged that he would need to do more to mend fences and build better relationships with a previously balky City Council, while also enlisting residents to help craft change-creating policies.

The mayor said that despite the challenges of the past and those ahead, he remains confident and optimistic as he draws inspiration from the resilience and hope he finds in others.

“I’ve talked to the mother, bone-tired after working multiple jobs, still concerned about the quality of education her children will receive. That’s hope,” he said.

“I’ve spoken to the returning citizen, crippled by a felony conviction, shedding tears of joy and gratitude for an opportunity to work again,” he continued. “That’s hope.”

“On my visits to each and every school in our city, I have met beautiful boys and girls who proudly share their big dreams with me. That’s hope.”

He urged city residents to join him to “meet our moment.”

“It won’t come easy. It will require Herculean effort from each and every one of us. But I know we will get there,” he said.