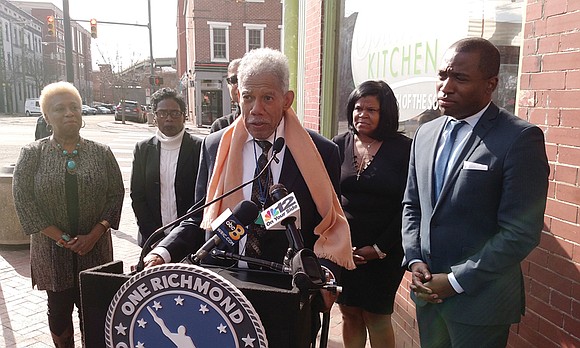 Richmond officials continue to struggle over a funding plan for the public school system’s facilities.

In a two-hour meeting Monday night of the Education Compact, Mayor Levar M. Stoney, and members of the Richmond School Board and Richmond City Council exchanged ideas and concerns on the best way to move forward to replace or improve the city’s aging and decrepit school buildings.

This first meeting of the Education Compact for the new year, held at the Richmond Police Training Academy in North Side, drew more than 60 interested parents and city residents.

The major sticking points were the content of the five-year, $224.8 million facilities plan approved by the School Board in early December and the proposed funding stream for the improvements.

City Council members expressed skepticism about the plans presented by interim Schools Superintendent Thomas E. Kranz because of their lack of detail.

Richmond financial advisers Davenport & Company painted a more detailed assessment of how to structure the city finances to raise the $150 million needed to fund the RPS facilities plan.

“Some have argued that we can raise money for our schools without raising additional revenue …” Mayor Stoney said in his opening comments to the group. “Unfortunately, I do not have a magic wand or $100 million in the seat cushions in City Hall.”

Mayor Stoney has proposed raising the city’s meals tax from 6 percent to 7.5 percent, with the approximate $9.1 million it would generate yearly going to upgrade schools.

City Councilman Parker C. Agelasto, 5th District, also has proposed an increased tax on cigarettes in order to increase the city’s revenue stream. But Davenport & Company officials indicated that a cigarette tax option is not recommended because it is a small, declining and unreliable revenue stream.

City Councilwoman Reva M. Trammell, 8th District, is worried that some South Side restaurants could close if the city’s meals tax is raised.

While the mayor, School Board and City Council agreed on the need to improve school facilities, the devil is in the details on how to raise the money.

“This is a no negotiable necessity,” City Councilwoman Cynthia I. Newbille, 7th District, told the group. “We still have a lot of work to do.”

After the meeting, Tanya Francis, who has three children attending the city’s public schools, said she hopes the facilities plan “will institute an atmosphere in RPS that our children can and will be successful.”

While several business groups support Mayor Stoney’s proposal for a meals tax increase, Carter Snipes, who owns restaurant properties in Scott’s Addition and has two children in RPS, said the mayor’s plan is short-sighted and does not spread the burden to support schools across more city residents.

“The funding is based on one funding source and not broad based,” Mr. Snipes told the Free Press. “A real estate tax is a more rational method and it would be less burdensome on each home.

“My preference is to raise all taxes across the board a little bit as opposed to coming after just one group,” he said. “We all should pay for the schools.”

In an effort to push his meals tax plan, Mayor Stoney held a news conference Tuesday outside of Southern Kitchen restaurant in Shockoe Bottom with several officials who graduated from RPS. He received support from the cadre of officials as he reaffirmed that RPS’ capital needs cannot be delayed any longer.

With him were former Richmond Mayor and state Sen. Henry L. Marsh III; Mr. Marsh’s daughter, Nadine Marsh-Carter, president and CEO of the Children’s Home Society who stepped down from the Richmond School Board last year following the death of her husband; interim 7th District School Board member Cheryl Burke, a former RPS principal who was named to replace Ms. Marsh-Carter on the board; City Councilwoman Newbille; and Southern Kitchen owner Shane Thomas.

They sang praises about their education in Richmond Public Schools and support for the mayor’s plan. But they also expressed some foreboding about the education received by today’s students and those in the future.

“When my father went to George Mason Elementary (in the 1940s), it was a challenge. And when I went there in the 1960s, it was still a challenge,” Ms. Marsh-Carter said.

“When is it time to step forward and invest in our youths and our future?” Ms. Marsh-Carter asked rhetorically. “We, in the city of Richmond, should put our money where our mouths are.”