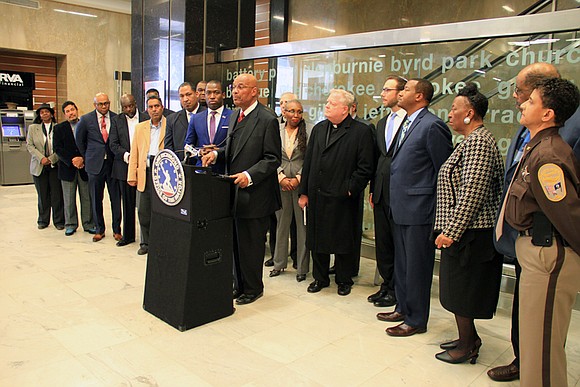 His promise: That the tax increase will raise $9 million a year, a revenue stream allowing the city to borrow $150 million for the construction and renovation of several new public schools over the next five years.

Even though Mayor Stoney lacks a fleshed-out and fully vetted plan on how the money would be spent — something he promised in September — and the funds to be raised would fall far short of the $225 million that the School Board needs for the first phase of its schools improvement plan, Mayor Stoney and his five City Council allies are rejecting any delay on the vote for the tax.

The tax would go into effect July 1.

The push to get the tax increase on the books was in full view Monday night as the nine members of City Council convened for the Organizational Development Committee meeting to consider whether to send the meals tax proposal for a vote at council’s next regular meeting on Monday, Feb. 12.

Three and a half hours later, at least 25 people had come forward to speak for or against the measure — from restaurateurs to School Board members and citizens. The council committee then voted 5-3, with one abstention, to pave the way for Monday night’s vote.

The abstention came from Councilwoman Reva M. Trammell, 8th District, who was incensed after members voted 5-4 to kill her motion to delay the vote for at least 30 days. She said she wanted time for council members to hold district meetings and hear from constituents.

Mr. Agelasto, whose district includes restaurant-rich Carytown, appealed to his colleagues to avoid a rush and to spend some time considering other options.

“I’m not opposed to a meals tax increase, but the mayor’s plan does not go far enough,” Mr. Agelasto said. He argued that there are ways to raise more revenue for schools, including passing a tax on cigarettes that council previously rejected.

The response was a swift, sharp no.

“You say, ‘Just wait.’ I can’t wait any longer,” said Ms. Newbille in an impassioned plea. She said children in her district are attending a 100-year-old school, George Mason Elementary, that is in miserable condition.

She and Mr. Jones acknowledged that the mayor’s plan still will leave the majority of city students attending decaying schools in five years. Both said the mayor’s meals tax plan should be described as more of a beginning to tackling the projected $800 million challenge of replacing about 35 outdated city schools.