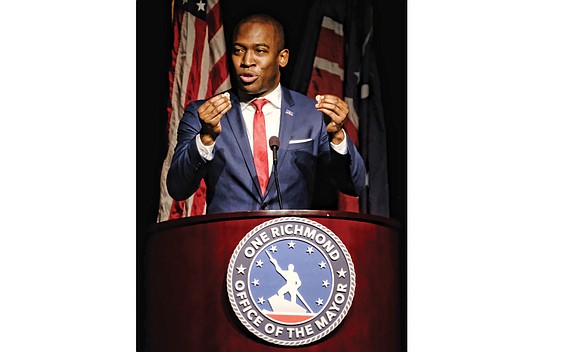 Declaring that Richmond “is strong,” Mayor Levar M. Stoney called for “bold and courageous” action to deal with some of the city’s unmet challenges such as decaying schools and public housing.

But the popular mayor mostly proposed taking small steps to address those challenges in his first State of the City Address delivered Tuesday evening in which he was interrupted repeatedly by applause.

The best example is his proposal to address what he called the “obsolescence, decay and decline” of the public school buildings that most Richmond students attend.

“This state of affairs is simply unacceptable,” he told the audience of more than 500 who gathered at Martin Luther King Jr. Middle School, from “overcrowding in the South Side or the deterioration of conditions at schools like George Mason Elementary.”

His solution: Raise the tax on restaurant and other prepared meals by 1.5 percent to generate $9.1 million a year. That would be enough to borrow $150 million for construction of new schools through 2023, a plan that would need City Council approval.

Currently, restaurant checks in Richmond include a tax of 11.3 percent, including 5.3 percent for state sales tax and a city meals tax of 6 percent. Mayor Stoney’s proposal would raise the tax to 12.8 percent, with the city’s meals tax increased to 7.5 percent.

“I do not relish imposing a higher tax” on restaurant meals, he told his audience that included members of City Council and the School Board and was heavily tilted to city employees and contractors.

But the city has “functionally used up its borrowing capacity” and must have new revenue to cover debt payments and create additional debt capacity, he said. “We are talking about one and a half cents. Surely, our kids are worth that much.”

However, his plan would allow construction of only a few school buildings over the next five years, leaving the majority of mostly African-American students in buildings he previously called “intolerable monuments to segregation.”

Some people are concerned that the mayor, like his predecessors, is focusing on new buildings and offered no ideas for ending the neglect of the larger inventory of aging buildings. The city for years has shortchanged school maintenance by an estimated $11 million a year, according to school officials.

The proposal also would fall far short of the referendum that Richmond voters approved by an 85 percent margin in November that called on the mayor to provide a fully funded plan to replace or overhaul all of the decrepit school buildings.

Paul Goldman, who led the push to get the initiative on the ballot, said the mayor’s proposal simply “kicks the can down the road” and belies his own campaign promise to make improving school facilities a priority. The meals tax plan the mayor advanced “is a failed policy,” Mr. Goldman said.

The mayor’s plan also falls short of the School Board request in December for $224.7 million to replace five schools with new buildings and to renovate two others between 2019 and 2023.