Spotlight on VUU board chairman and the MLK Community Leaders Celebration 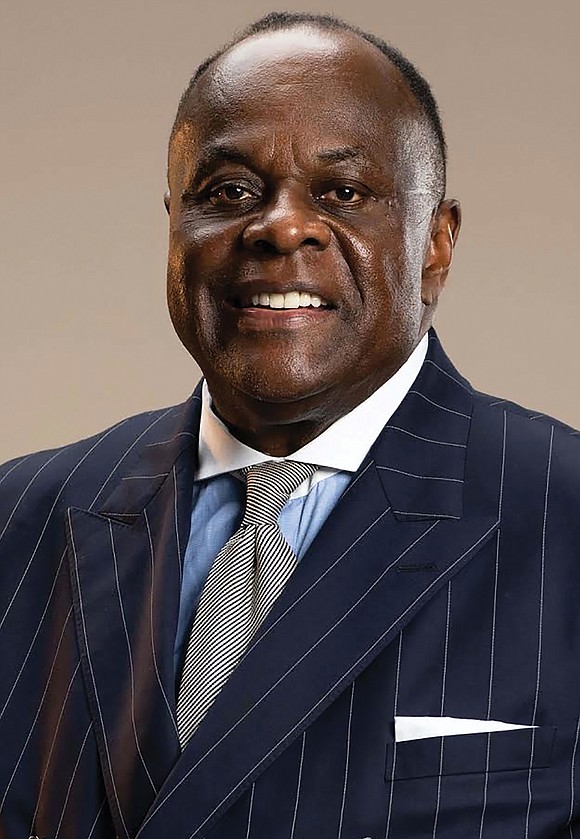 The event, called the Community Leaders Celebration this year, will be broadcast 9 a.m. Monday, Jan. 18, on CBS6 in Richmond and WTKR-TV3 in Hampton Roads, and on VUU’s Facebook page and YouTube channel @VUUTV.

While the change is in response to the ongoing COVID-19 pandemic, Dr. W. Franklyn Richardson, chairman of the VUU Board of Trustees, notes the event’s continued importance as a bridge builder within the community.

The celebration, he notes, offers the opportunity “to re-emphasize the importance of partnerships between all of our communities to erase the damage done by the history of discrimination and racism and to forge an era of equality, opportunity and equal access.”

It also comes during a time, he says, when there is a “re-emergence of the evils we fought to eliminate in the 1960s and the 1970s.”

Originally organized in 1979 by VUU and the Richmond Committee of Black Clergy, the Community Leaders Breakfast was part of a weeklong celebration of educational and cultural events called Community Learning Week, which honored the memory and mission of the late Dr. King.

The weeklong event was relaunched as Living the Dream Inc., which partners with VUU to host the annual event. Other sponsors include the United Negro College Fund, Dominion Energy and the two television stations that will be broadcasting the event.

Through the annual event, the university seeks to keep the ideals of Dr. King at the forefront, along with “the struggles and sacrifices” of Black people, “for the purpose of bridging gaps between our communities – whites, Blacks and other people of color,” Dr. Richardson says.

“As we celebrate Dr. King’s life, we are challenged in our own lives to live up to the ideals that he put forward of justice and equality.”

Dr. Richardson, a 1972 graduate of VUU, speaks fondly of his alma mater, which he says “offered hope for me in a time of great despair.” He has a sense of “indebtedness” to the school, he says, and is proud to serve now as chairman of the Board of Trustees, a position he has held since 2011.

In this role, Dr. Richardson seeks to stabilize VUU in terms of curriculum, resources and reputation. Like others, his work is done to help ensure VUU’s future, build confidence in its competency and maintain a place of opportunity for those with few options.

“Everyone wherever they are, whether they are teachers, corporate leaders, whether they are political leaders, whatever place they find themselves – they have to examine the prospects of an equal opportunity for all and be an advocate for that,” Dr. Richardson says. “We must all make a difference in every place we are.

“We must not wait for others to do it, but to find ways to do it in the space we occupy.”

Date and place of birth: June 14 in Philadelphia.

Where I live now: Scarsdale, N.Y.

When and why founded: Virginia Union University was founded in 1865 by the American Baptist Home Mission Society to give newly emancipated slaves an opportunity for education and advancement.

Richmond Theological Seminary held classes in Richmond at Lumpkin’s Jail, a former holding cell for runaway slaves. The building was leased to the American Baptist Home Mission Society by Mrs. Mary Lumpkin, a former slave, who we recognize as the “Mother of Virginia Union University.” During the same time, Wayland Seminary was founded by the ABHMS in Washington, D.C. Two years later in 1867, Storer College was founded in Harper’s Ferry, W.Va., and in 1883, Hartshorn Memorial College opened its doors in Richmond as the first college for African-American women.

Mission: Virginia Union University is nourished by its African-American heritage and energized by a commitment to excellence and diversity. Its mission is to 1) Provide a nurturing, intellectually challenging and spiritually enriching environment for learning; 2) Empower students to develop strong moral values for success; and 3) Develop scholars, leaders and lifelong learners of a global society. To accomplish this mission, Virginia Union University offers a broad range of educational opportunities that advance liberal arts education, teaching, research, science, technology, continuing education, civic engagement and international experiences.

Historically Black Colleges and Universities are important: For several reasons. They repair broken self-esteem caused by 400 years of systemic racism. They provide access to educational opportunities for a significant portion of the African-American population that would not have access to that education. They compensate for the 400 years of neglect and marginalization inflicted upon the African-American people in the realm of education and economic opportunity.

I chose to attend VUU: Because I had very few options and it offered hope for me in a time of great despair.

Fondest VUU moment: My greatest moment is when I look back over my journey and see that I went from a conditional matriculation because of my reading impairment in 1967 to becoming chairman of the Board of Trustees for Virginia Union University and having the high honor of having my signature placed on every degree.

Why I accepted position: Because it was an opportunity to pay back so much of what I received. I have a sense of indebtedness to Virginia Union and having been blessed with so many opportunities and resources. I felt that the best use of my life at this point was to be available to serve as chairman.

Length of term: Three-year term with the option to be re-elected.

No. 1 goal as board chairman: To stabilize the university from a curriculum, resource and reputational perspective to enhance the quality of the education that we give to our young people so that they may go forth and achieve things that were unimaginable to my generation.

No. 1 challenge facing VUU: To continue to build confidence in our competency. To deliver best-in-class education by becoming a best-in-class institution.

COVID-19’s impact on VUU: It has had a tremendous impact on the university in terms of how we carry out our mission. However, I’m happy to say we have had excellent response by our president, faculty and staff in making adjustments to deliver the education in both virtual- and classroom-based learning environments in the midst of the pandemic. Our enrollment increased and our budget surplus increased during the pandemic.

What is the Martin Luther King Jr. Community Leaders Breakfast: It is an attempt for the university to continue to keep at the forefront the ideals of Dr. Martin Luther King Jr. and the struggles and sacrifices of African-American people for the purpose of bridging the gaps between our communities — white people, Black people and other people of color. As we celebrate Dr. King’s life, we are challenged in our own lives to live up to the ideals that he put forward of justice and equality.

This year’s 43rd annual Martin Luther King Jr. Community Leaders’ Celebration is reimagined: For the first time, the long-standing annual remembrance of Dr. King’s legacy will be streamed virtually, as well as broadcast on CBS6 and CBS3 to be shared with thousands of households throughout the Richmond region and Hampton Roads. This year’s event will recognize leaders and organizations from both Richmond and Hampton Roads that exemplify Dr. King’s spirit of selflessness and commitment to the empowerment of the “beloved community” in the areas of legislation, health equity, economic justice and education.

Dr. Martin Luther King Jr.’s legacy and his impact on Richmond: His life and message have definitely had an impact on Richmond and the world. In Richmond, his message and life have helped us to take down obstacles and build bridges. Although, there is much to be done — the distribution of wealth in Richmond and in many cities across America is unequal; the opportunity of the access to resources is not equal; the opportunities for advancement in corporate America are not equal; and the access to resources of private colleges like Virginia Union as opposed to predominately white institutions/colleges (PWI) — is grossly unequal. Virginia Union struggles to be effective and competitive in the face of the great inequity in terms of resources.

Dr. King’s teachings are more important today than ever: Because the challenges they put forward are still existent and in some ways, there is a sense of the re-emergence of the evils we fought to eliminate in the 1960s and the 1970s. They have not gone away and have resurfaced particularly during the last four years. White supremacy, Nazism and hate groups continue to flourish, therefore, we must continue to be vigilant in perpetuating the message of peace, equality and shared vision for this country.

How I start the day: I begin with a reflection and prayer. Then I start on my day building from the day before and being directed by my commitments to justice, fairness and righteousness. It is a never-ending pursuit.

Three words that best describe me: Faith, activism and preparation.

How I unwind: Running on the track in the morning and taking opportunities to get away and renew.

Something I love to do that most people would never imagine: Captain a boat.

A quote that most inspires me: A Ralph Waldo Emerson quote that was said by Dr. Martin Luther King Jr. in 1967: “If a man can write a better book or preach a better sermon or make a better mousetrap than his neighbor, even if he builds his house in the woods, the world will make a beaten path to his door.”

At the top of my “to-do” list: To make my life of value for those who follow me.

Best thing my parents ever taught me: To be my best and trust God.

Person who influenced me the most: My mother.

Book that influenced me the most: “Overcoming the Dark Side of Leadership” by Gary L. McIntosh and Samuel D. Rima.

What I’m reading now: “A Promised Land” by former President Barack Obama and “Caste: The Origins of Our Discontents” by Isabel Wilkerson.

Next goal: My next goal, while not defined, would consist of being faithful to the opportunities and responsibilities I currently have, which are pastor of Grace Church, to serve as chair of the board at Virginia Union University and chair of the board of the National Action Network and board membership of the Conference of National Black Churches.