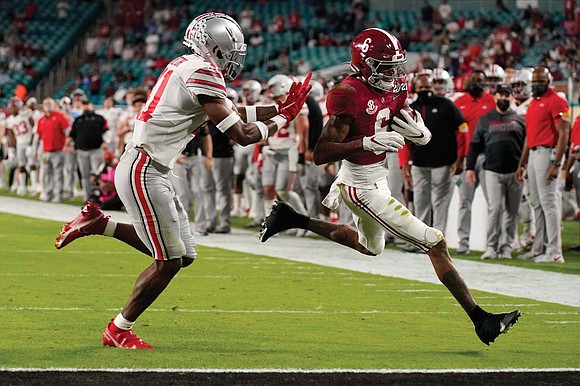 Alabama is clearly the top team this season and perhaps of all time.

“I think this is the best team to ever play,” said Alabama quarterback Mac Jones after pass- ing for 464 yards and five touchdowns.

Jones called the rout of Ohio State “the icing on the cake.”

The quarterback’s lead role was shared by wide receiver DeVonta Smith and running back Najee Harris.

Earlier, Jones received the Davey O’Brien Award for the nation’s top quarterback while Harris was presented the Doak Walker Award as the premier running back.

The 13th win over OSU went much like the previous 12.

Alabama compiled 621 yards total offense with 33 first downs against the Buckeyes (7-1) and led by 35-17 at halftime.

On the season, the Tide averaged 49 points and 542 yards offense.

Barmore, who had a sack and two other tackles for losses, also believes the Tide is the team for the ages.

“We didn’t hear the outside noise,” he said. “We ignored the COVID stuff. We just really grinded it out for this, camp, scrimmage, everything.”

The one-sided finale marked the sixth national title for Coach Saban’s program since 2009.

Despite all the previous success, the 69-year- old Coach Saban suggests the current edition holds a special place in history.

“Played 13 games, went undefeated with all the disruption we had this season,” Coach Saban told the media. “I think there’s quite a bit to write about when it comes down to the legacy of this team.”