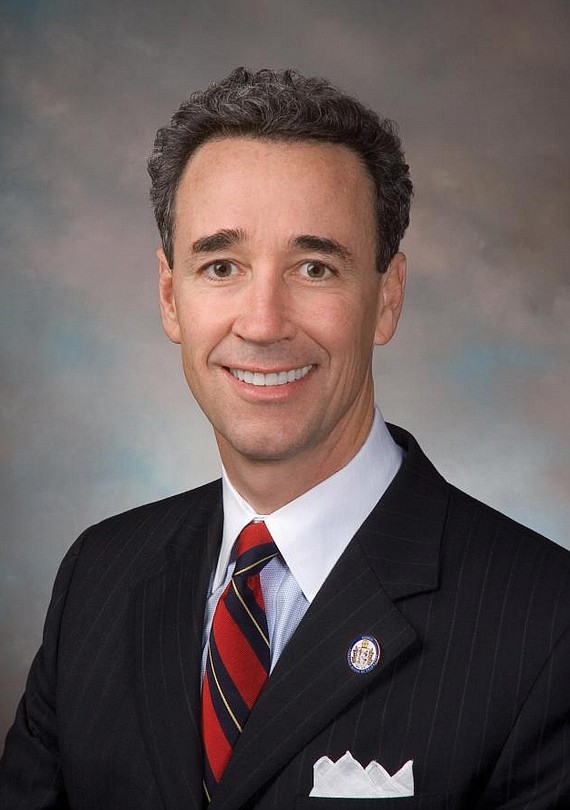 Sen. Morrisey issued the call Friday after the swift dismissal of three charges that he had violated a state law barring electioneering in a polling place in November 2019.

The senator, who called the charges “frivolous,” blames Mr. Herring for authorizing a State Police investigation of the events in response to a request from Richmond Commonwealth’s Attorney Colette W. McEachin. She made the request after receiving a complaint, then recused herself from the case.

New Kent County Commonwealth’s Attorney T. Scott Renick then was appointed to handle the matter, and Mr. Herring’s office stated that Mr. Renick made the decision to bring the charges without any suggestion or interference.

Speaking last Friday outside the Marsh Courthouse in South Side, Sen. Morrissey said that if Mr. Herring or his office had done the slightest check before authorizing the investigation, they would have realized he did nothing wrong.

Otherwise, Sen. Morrissey said, he would ratchet up his support for Norfolk Delegate Jay Jones, the top Democratic challenger to Mr. Herring’s bid for a third term as attorney general.

Mr. Herring has not commented, but his office has stated that he acted on a routine request for permission to investigate an elected official and had no other involvement.

The charges stemmed from an allegation that Sen. Morrissey interfered with the polling operation at the Powhatan Community Center in the city’s East End when he visited on Election Day, Nov. 5, 2019, while seeking election to the Senate.

A woman in the room, who was not voting, videotaped him giving doughnuts to staff, chatting and taking pictures with them before leaving. The woman filed the complaint that triggered Ms. McEachin’s investigation request.

The dismissal in Richmond General Dis- trict Court ended Sen. Morrissey’s latest legal problem in a case he called “doughnut-gate” but left lingering questions about Mr. Renick’s rationale for filing the charges and about the quality of the State Police investigation that was the basis for that action.

The charges were filed nearly two months ago on Nov. 30.

The special prosecutor, assistant New Kent Commonwealth’s Attorney Greg T. Overholser, sought the dismissal and confirmed after court Sen. Morrissey’s claim that there was no evidence to sup- port the charges.

As Mr. Overholser put it, the case was “not ripe for prosecution.” He refused to explain the justification for bringing the matter to court.

Although State Police are not releasing the report or commenting on it, Sen. Mor- rissey described the investigation as shoddy and said that the report is too skimpy and inadequate to support the charges.

“The charges are outrageous and do not accurately reflect what happened at the polls that day,” Ms. Bruno stated in an affidavit that Sen. Morrissey was prepared to present and showed to the Free Press.

Yolonda Jones, the precinct’s chief elec- tion officer, was never interviewed for the report, but came to the court prepared to testify that Sen. Morrissey could not have disrupted the election process.

She told the Free Press after the case was dismissed that “there were no voters in line or voting” when Sen. Morrisey was inside the precinct. State law allows candidates to visit a polling place for no more than 10 minutes on Election Day as long as they are not disruptive.

The 2019 election drew few voters to the precinct, said Ms. Jones, who has been chief election officer for 15 years. The only names on the ballot at the precinct were Sen. Morrissey and his independent chal- lenger, and Democratic Delegate Delores L. McQuinn, who was running unopposed for re-election.

“I didn’t understand why he was charged,” Ms. Jones said. “Nothing was going on at the time.”