Monacan’s Kendrick Warren Jr. may be the next ‘Special K’ 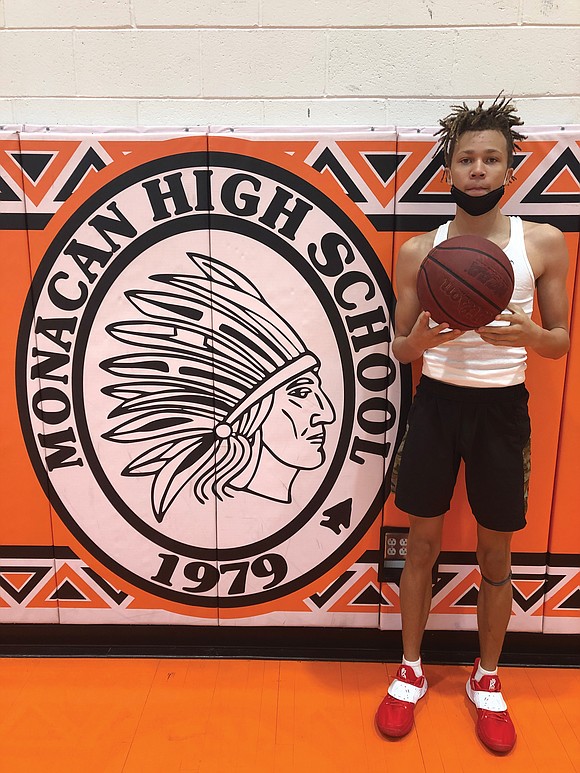 The “Kendrick Warren Show, Part 2” is coming soon to a basketball court near you.

“Kendrick has superior athleticism,” said Monacan Coach R.J. Spelsberg. “He can put his shoe laces on the rim.”

The 6-foot-5, 165-pound guard-forward has combined jumping ability, foot speed, a smooth shooting stroke and all-round court sense to help the Chiefs to a 3-1 record.

“My role is to knock down a few shots, get a few dunks, some easy points, and get everyone excited,” Warren said.

He was averaging about 11 points and five rebounds during the promising start of the season.

In Monacan’s Jan. 15 loss to Midlothian High School, Warren had 12 points, with all six baskets coming via dunks.

He is also a team leader defensively.

“Actually, I think I enjoy defense more than offense,” he said.

Despite his bloodline, young Warren wasn’t an overnight success in sneakers. He was a late bloomer in terms of height and was more into soccer than basketball until recently.

“I was fast but not very tall,” he said. “I really thought soccer would be my sport.”

He never made much impact on the Providence Middle School basketball squad, but did become something of a phys ed marvel.

“I remember going to phys ed and everyone wanted to see me dunk,” he said, noting he was under 6-feet at the time. “That’s what really started to get me excited about basketball.”

Still, he played on Monacan’s junior varsity basketball team as a freshman and sophomore and gave little indication he possessed star qualities.

“Kendrick is one of the most improved players we’ve had,” said Dan Parsons, director of athletics at Monacan. “He has really gained in confidence. You didn’t notice him that much on JV, and now he’s jumping out of the gym. Plus, he’s a super nice kid.”

Coach Spelsberg suggests the best is yet to come for his slender leaper.

“He has grown a lot already, but I think there is still another growth spurt in him. He might wind up 6-6 or 6-7,” the coach said.

“Kendrick has a very bright future.”

Warren, who has not played offseason AAU hoops, wears the No. 1 jersey for Monacan.

His father’s No. 23 jersey is retired at VCU. As a Ram under former Coach Sonny Smith from 1990 to 1994, the 6-foot-8 Warren Sr. scored 1,858 points, grabbed 1,049 rebounds and was a three-time All-Metro Conference selection. He achieved those showy statistics despite missing much of his junior season with a knee injury.

An all-time crowd favorite among Rams fans, Warren Sr. was famous for his spectacular above-the-rim play. No one ever dunked at VCU with more authority than Warren Sr.

Prior to that, Warren Sr. was a three-time All-Metro pick at Richmond’s Thomas Jefferson High School under Coach Jay Johnson.

Warren Sr., 49, is now head coach at Thomas Jefferson High. But because the Vikings aren’t playing this winter because of the pandemic, he’s able to watch his talented son perform.

“I think I was about in fifth grade when my father started talking to me about playing basketball,” Warren Jr. recalled.

“He urged me to be assertive and make my presence known.”

It took a while for him to spread his wings. But now Warren Jr. has started to flash a few glimpses of being the next “Special K.”