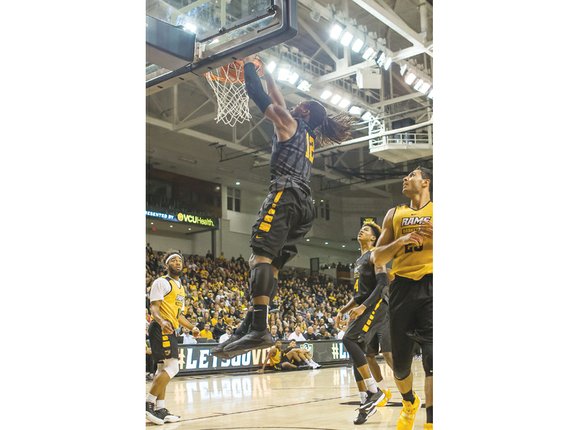 If dunks were donuts, Justin Tillman would be rich in sweet treats today.

In helping the Black Team — basically VCU’s first string — to a 85-76 victory over the Gold Team, Tillman entertained with six dunks (he was 9-for-11 overall from the floor) en route to 20 points and 10 rebounds.

“He dunks everything and I love it,” said first-year Coach Will Wade. “But sometimes I worry about Justin breaking the backboards.”

Tillman will try for similar results 7 p.m. Friday, Nov. 6, in a homecourt exhibition against California University of Pennsylvania.

Based on action at the Black & Gold Game, Coach Wade may be leaning toward a lineup of junior JeQuan Lewis and senior Mel Johnson in the backcourt, senior transfer Korey Billbury on the wing, and Tillman and junior Mo Alie-Cox down low.

As a freshman, Tillman averaged a modest four points and three rebounds. The Rams hope he at least doubles those numbers this season.

Coach Wade’s first official game as VCU head coach will be Nov. 13 when Prairie View A&M University, an HBCU, comes to the Siegel Center for the opening of the 2K Classic benefiting the Wounded Warrior Project.

In VCU’s visit to New York City last March, it won the Atlantic 10 Tournament at the Barclays Center in what would be Coach Smart’s final season with the Rams.