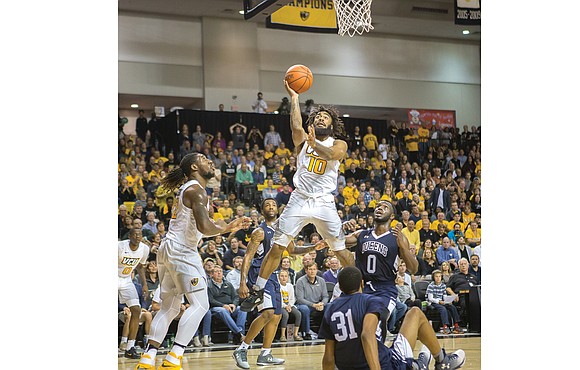 James Haskins/Richmond Free Press VCU guard Jonathan Williams of Richmond goes up and over the heads of players from Queens University during an exhibition game last Friday at the Siegel Center in Richmond.

No more excuses. Now it counts.

The Virginia Commonwealth University Rams can justify a humbling 75-73 basketball loss to Queens University of Charlotte, N.C., last Friday as a mere exhibition.

In front of a sold-out and stunned Siegel Center crowd, VCU committed 25 turnovers and was just 8 for 26 shooting 3-pointers.

Those ugly numbers will need upgrades Friday, Nov. 11, when the Rams play host to the University of North Carolina-Asheville in the true season opener at 7 p.m.

The Bulldogs won the Big South Conference last year before losing to eventual champion Villanova University in the first round of the NCAA basketball tournament.

VCU hasn’t dropped a season opener since the fall of 2005 when the team lost at Appalachian State University under Coach Jeff Capel III.

The Rams’ last exhibition loss was to Virginia Union University in the fall of 2005, also under Coach Capel.

Coach Will Wade’s second season game with the Rams will be on the road at Liberty University on Nov. 15 in Lynchburg.