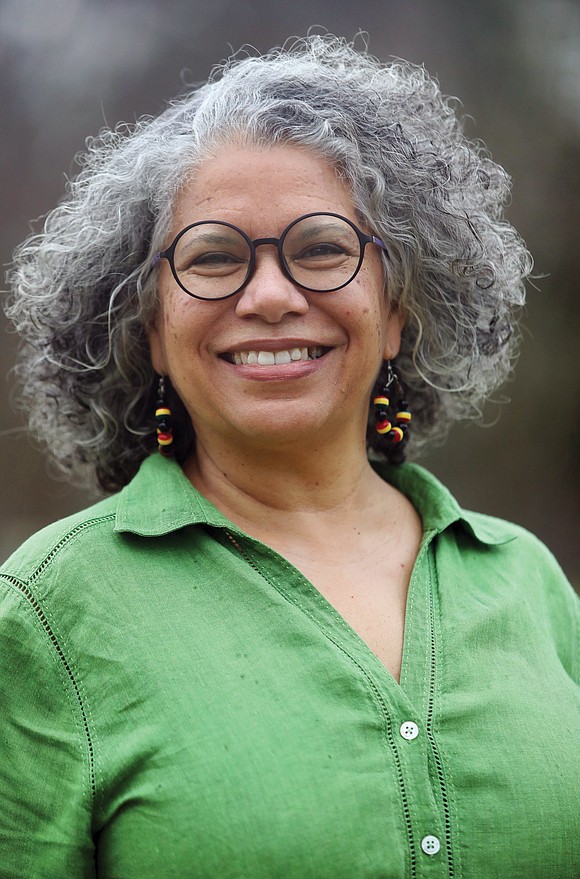 In 1800, an enslaved man named Gabriel attempted a daring revolt in Richmond. His efforts were stymied by a severe thunderstorm and betrayals by co-conspirators. His story was consigned as a minor failure for centuries, largely forgotten.

Today, however, the narrative around Gabriel’s Rebellion is being reclaimed and re-evaluated—and has brought acclaim for Ana Frances Edwards, a public historian and chair of the Sacred Ground Historical Reclamation Project that helped bring his story back to prominence.

For her work, Ms. Edwards is the first recipient of the Graduate Alumni Achievement Award from Virginia Commonwealth University’s Department of History.

“I think I was surprised at how pleased I was,” says Ms. Edwards when asked what the award means to her. “It is recognition by my peers, which means a lot to me.”

Ms. Edwards cites her research into Gabriel’sRebellion and how its reality differed from the public consensus as what ultimately spurred her into uncovering and protecting Black history in Richmond.

The Sacred Ground project began in 2004 as a social justice initiative by the Defenders for Freedom, Justice and Equality to reclaim, expand and promote public history. Gabriel’s story was among the first missions the group and Ms. Edwards focused on. It’s also a personal exploration of history for Ms. Edwards, a native of California who has family roots in Virginia, with at least one ancestor having been sold into slavery from Richmond.

“Getting to know the early history of Black life in Richmond and its relationship to my family’s journey over time through slavery and freedom, and the connection of all of that to the start of the nation, was like having a hundred doorways burst open,” Ms. Edwards says.

In addition to addressing historical wrongs and omissions through researching Gabriel’s Rebellion, Ms. Edwards has contributed to efforts to reclaim Richmond’s African Burial Ground at 15th and Broad streets in Shockoe Bottom, where Gabriel is believed to be buried after being caught and hanged.

Ms. Edwards also has long been an advocate for the planned 9-acre Shockoe Bottom Memorial Park to tell the story of enslaved Richmonders. She also is engaged in the reclamation of another African burial ground on Shockoe Hill.

Ms. Edwards sees an urgent need for the work of the Sacred Ground Project and for people to understand history. Demonstrators as young as Gabriel, who was 24 when he planned the rebellion, took to the streets last spring and summer calling for racial justice and police accountability in the wake of the police killing of George Floyd in Minneapolis.

“There were young people on the streets last year who knew about the relationship between Richmond’s past and present inequities because they grew up in a Richmond when the work of the Sacred Ground Project, the Defenders and so many others was becoming common knowledge,” Ms. Edwards says. “That tells us that this kind of public history work is important.”

Ms. Edwards is hopeful that her work’s impact can help future generations of African-Americans avoid the horrors inflicted on people of color and the marginalized.

A mother of two, Ms. Edwards is keenly aware of the struggles youngsters face here and across the United States.

“I want Richmond’s Black mothers and fathers to raise their children with the conviction that Richmond has always been theirs as much as it was anyone else’s,” Ms. Edwards says, “and that the right to determine its future is within their power.”

Date and place of birth: Sept. 15 in Los Angeles.

Reasons given for your top honor: This award recognizes an alum of the history department master’s degree program “who has made distinguished contributions to their profession or chosen field of endeavor.”

First reaction to news of the recognition: Complete surprise!

Historic preservation is: About people and the places that have meaning to them. In Richmond, it has become an effective way to bring people together around important historical inequities and different ways to address them.

When I became interested in protecting Black history in Richmond: When I began to learn that Gabriel’s Rebellion was far more important to the founding politics of the United States than its reputation as a “failed” rebellion would have us believe. I didn’t know it would become my first opportunity to be involved in repairing a historical narrative. Before I came to Richmond, I had learned that my father’s family’s roots were in Virginia and that at least one ancestor grandmother had been sold from Richmond.

Need for history and social justice in Richmond is: Urgent. The Black Lives Matter rebellions of 2020 were really just an escalation of what has been in the works for a long time — the public reckoning of how racism has been used to the advantage of some by specifically disadvantaging others. Other cities are paying attention to what Richmond — and Virginia — will do because it has played such particular roles in furthering both the higher and baser tendencies of American culture, from colonial times to the present. We are finally reaching a point where knowing our history matters as much at the policy meeting as it does in the books or at the dinner table.

Significant history projects I work on: Helping to reclaim Richmond’s African Burial Ground (2011); blocking the attempt to put a baseball stadium in Shockoe Bottom; the ongoing campaign to win the community-generated proposal for a 9-acre Shockoe Bottom Memorial Park (since 2015); working on the East Marshall Street Well Project; and the current reclamation of the Shockoe Hill African Burial Ground.

How I hope this impacts Richmond’s future: The story of 24-year-old Gabriel and the stand he made against slavery and its brutality from the beginning made me think of horrors I would not want my sons or daughters to face. I want Richmond’s Black mothers and fathers to raise their children with the conviction that Richmond has always been theirs as much as it was anyone else’s and that the right to determine its future is within their power.

Project I am most proud of: Our first one — popularizing of Gabriel’s Rebellion as a Richmond story and helping with the reclamation of the African Burial Ground.

Lessons learned from my work: How much can be accomplished when people overcome thinking that they have no voice or power.

What I like most about Richmond: Sunset over the James River from high ground.

How I start the day: Optimistic. Standing in the morning light, sipping from a hot cup of tea.

A perfect day for me is: Getting good stuff done, seeing people happy, standing ankle deep in the sand and surf on a warm, overcast day.

What I have learned about myself during the pandemic: That white wine can be just as good as red wine.

Something I love to do that most people would never imagine: Pull weeds. I used to be a landscape gardener.

Quote that I am inspired by: “Definitions belong to the definers, not the defined.” ― Toni Morrison, from “Beloved.”

At the top of my “to-do” list: Attend the unveiling of the Shockoe Bottom Memorial Park with thousands of you!

Best thing my parents ever taught me: To read. Books opened the world to me. The earliest book I remember reading was Jacob Lawrence’s “Harriet and the Promised Land,” about Harriet Tubman. I think I was about 6. Still a favorite.

Person who influenced me the most: In life? My mother and father. In Richmond? My husband/political partner.

Book that influenced me the most: “A Different Mirror: A History of Multicultural America,” by Ronald Takaki.

Next goal: To write my first book — about the lives of free Black people in 18th and early-19th century Richmond, expanding on my master’s thesis on the same subject.