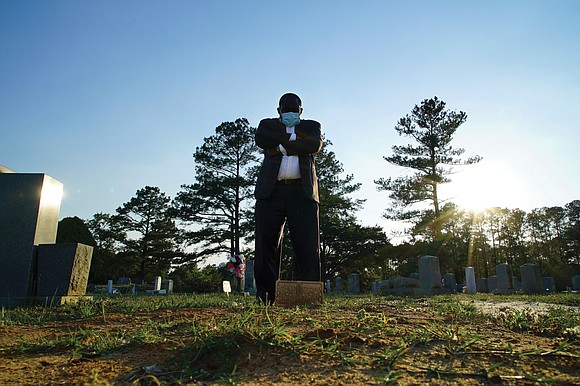 Mortician Shawn Troy stands at the grave of his father, William Penn Troy Sr., at Hillcrest Cemetery outside Mullins, S.C., on Sunday, May 23, 2021. The elder Troy, who developed the cemetery, died of COVID-19 in August 2020, one of many Black funeral directors to succumb to the pandemic. “I don’t think I’ll ever get over it,” he said. “But I’ll get through it.” Photo by Allen G. Breed/Associated Press

MULLINS, S.C. - When the last mourners departed and funeral director Shawn Troy was left among the headstones, he wept alone.

For five decades, the closing words at countless funerals in this town of 4,400 had been delivered by his father, William Penn Troy Sr. Now the elder Troy was gone, one of many Black morticians claimed by a pandemic that has taken an outsized toll on African Americans, after months of burying its victims.

And as Shawn Troy stepped forward to speak in place of a man well known beyond his trade—for his work in county politics and advocacy of its Black citizens—the emptiness felt overwhelming. Not just his family, but his community, had lost an anchor.

“I walked over to his grave and I could hear him talking to me,” Shawn Troy said, his own voice breaking as he recalled kneeling beside the plot last September, on a low rise near two palmetto trees. “And he said, ‘You got it. You can do it. This is what you were built for.’ He passed the baton on to me, so I’ve got to get running.”

He is hardly alone. Since the start of the pandemic, about 130 Black morticians have died from COVID-19, according to the association that represents them.

Deaths of funeral workers are not closely tracked. But the National Funeral Directors Association, which represents the broader industry, said it has not seen a corresponding rise in COVID deaths among its members.

The deaths of Black morti- cians are particularly notable because of the prominent role they have long played in many communities. Often admired for their success in business, a number have been elected to political office, served as local power brokers, and helped fund civil rights efforts.

At the same time, the “home-going” services they arrange have frequently served as communal touchstones, events as much about life as death, that draw mourners together with pageantry, preaching and song.

Black funerals are “more celebration, and that’s no disrespect to my colleagues across the country. We’re more, I should say, intimate,” said Hari P. Close, president of the National Funeral Directors & Morticians Association and the operator of a Baltimore funeral home. The association represents Black morticians.

When the pandemic hit, the very closeness and celebration that distinguish Black funerals put morticians at risk, Mr. Close said.

Their deaths have left some successors struggling to fill their role.

“It has really had an impact ... particularly in African-American funeral homes,” he said.

The deaths have come despite concerted efforts by morticians to protect themselves from the virus and limits imposed on the size and scope of burial gatherings to keep it from spreading.

“This year was unlike any other year I’ve ever lived through in the funeral service,” said Edith Churchman, the fourth-generation owner of a mortuary in Newark, N.J., that serves a largely Black clientele.

Dealing with an onslaught of COVID-19 deaths, at first with limited personal protective equipment, and later with shortages of caskets and prepared burial plots, put pressure on funeral directors that far exceeded the demands at the peak of the AIDS epidemic, she said.

“We were getting bombarded with COVID bodies,” said Dr. Mary Gaffney, who stepped in to run her brother, Jeremiah’s, funeral home in Inwood, N.Y., after he died of the virus last May.

At least 95,000 Black Americans have died of COVID-19, according to an AP analysis of data from the National Center for Health Statistics, perishing at the highest rate of any racial group in the United States.

Adjusting the figures to ac- count for age differences shows that Black people, Latinos and Native Americans are two to three times more likely to die of the virus than white people, according to the federal Cen- ters for Disease Control and Prevention.

“Of course ... you feared for your own safety,” Ms. Churchman said. “You’re kind of dangling on that precipice, saying what if?”

“People would be like, ‘You know, Mr. Sonny,’ and they’d just begin to talk and share things with him. It was just like a given,” his wife, Georgia Dillon, said.

In one of those conversations early this year, a restaurant manager confided to Mr. Dillon that he’d lost three family members to COVID-19 in a matter of weeks. The mortician extended his condolences, reassuring the man that, contrary to what some people said, the pandemic was very real. Those words proved prescient.

A few weeks later, a funeral home employee tested positive, followed soon after by both of the Dillons.

“Just in case I don’t make it out of here, this is what I want you all to do,” Sonny Dillon told his wife from a hospital bed in March. He died weeks later at 72.

Georgia Dillon, a nurse, had long helped keep financial ledgers for the business. But her husband was the unquestioned consoler-in-chief and she and other family members scrambled to keep the funeral homes in McComb and Tylertown, Miss., running in his absence.

But there was little filling the role that Sonny Dillon occupied beyond the mortuary. In his 20s, he had been one of the first Black candidates elected to local political office. Later, he worked with the daughter of Dr. Martin Luther King Jr. to rename a boulevard for the slain civil rights leader. He pushed to get more Black citizens to vote.

Mr. Dillon’s civic role fit a pattern common in many African-American communities, where morticians have long been prominent, said Suzanne E. Smith, a professor at George Mason University who authored a book about the Black funeral business.

The best known include the Ford family of Memphis, Tenn., funeral home operators who sent a father and son to Congress. In Detroit, funeral director Charles Diggs Sr. was a state legislator before his son won a seat in Washington and helped found the Congressional Black Caucus.

In cities throughout the South, funeral directors often supplied the limousines for visiting civil rights leaders when they came to rally supporters.

“There’s all this stuff going on in (Black) funeral homes that is not about burying the dead, but servicing the living,” Ms. Smith said.

By late this summer, Geor- gia Dillon was preparing to turn over the business to her daughter and son-in-law. Work- ing together with employees at the funeral homes, the family is determined to maintain the business as Sonny Dillon would have run it.

“We talk and we cry and we try to build each other up. We tell each other we’ve got to keep his legacy going,” Ms. Dillon said.

In New York, Dr. Gaffney is trying to do much the same, but after years away from the funeral business.

The funeral home, started by the Gaffneys’parents in the early 1970s, had long served mostly African-American families in the city neighborhoods and sub- urban towns near John F. Ken-

nedy International Airport. While Jeremiah Gaffney ran the family business, Dr. Gaffney studied medicine, setting up a practice in Charlotte, N.C. After her brother fell ill over the Easter weekend of 2020 and then was diagnosed with COVID-19, she tried to ensure his care. But his death weeks later, at 65, confronted Dr. Gaffney with responsibilities

well beyond her expertise. She declined offers to sell, feeling that would betray the legacy of her parents and the grandparents who funded its founding.And she has embraced the role her brother once filled as the face of the business, taking calls from grieving families at all hours. Just getting through a year without her brother to tell her what to do feels like crossing a finish line, she said.

“We’re going to see what the future holds,” said Dr. Gaffney, who hopes younger family members might eventu- ally seek a place in the business. “Needless to say, it has been an emotional journey.”

South Carolina’s Shawn Troy has faced somewhat different challenges, taking over the mortuary business founded by his father in 1973 after years of working alongside him.

“The thing about me and my dad was, we woke up together, we came to work together and then went home and ate together and talked late at night,” he said.

The Troys had agreed that Shawn would take over the business during the next few years. But he had expected to do so with his father’s counsel. The void left by the senior Troy’s death extends well beyond the chapel.

Through the years, the elder Troy, known as Penn, had served as a county commissioner, lo- cal school board member and church treasurer. But those were just his official duties.

“If my mother didn’t have enough to feed us, he’d help us out. When you’re talking about Mr. Penn, he was the commu- nity,” said Jessica Godbolt, a former neighbor whose family gathered recently for the funeral of her uncle.

Penn Troy used jokes and small talk to win people over and get things done, said Cynthia Legette, a school board member and longtime friend.

When officials voted to close a school because of declining enrollment, Mr. Troy pushed to turn it into a science and technol- ogy academy that quickly drew more students, she said. Noting that a citizens committee lobbying for school improvements was overwhelmingly white, Mr. Troy made calls that brought Black parents into the fold.

“Growing up in the ’60s, Penn knew what struggle was,” Ms. Legette said. “He would tell me, ‘Cynthia, we have been blessed ... so it’s up to us to lift the torch and light the way for our children’.”

In recognition, officials gathered recently under a tent at Mullins, S.C.’s edge to name a stretch of U.S. 76 the WilliamPenn Troy Highway. Directly across the road, a digital sign flashed a welcome to motorists: “For Your Safety and Ours, Please Wear a Mask.”

Last summer, Mr. Troy and his son were diagnosed and hospitalized with COVID-19. The elder Troy never returned home. And two weeks after his father’s burial, Shawn Troy presided over the first funeral without him.

The early months were the hardest. Penn Troy’s charisma gave life to the business of death. Shawn Troy had worked mostly behind the scenes. He recently declined an invitation to get involved in civic affairs, at least for now, preferring to focus on his new role.

Standing in the chapel recently on the evening before a funeral, he greeted mourners by name, placing his arm around several shoulders.

“You doing all right?” he asked from behind his mask. “I haven’t seen you in a while.”

But returning again and again to run funerals at the cemetery where his father is buried is a constant reminder that he is doing so alone.

Near sunset recently, Shawn Troy paced down a row of headstones, planting tiny flags at an empty plot to mark it for a burial the following morning. Not 50 feet away, lengthening shadows stretched across his father’s grave.