Hampton beats Howard in the ‘Battle for the Real HU’ 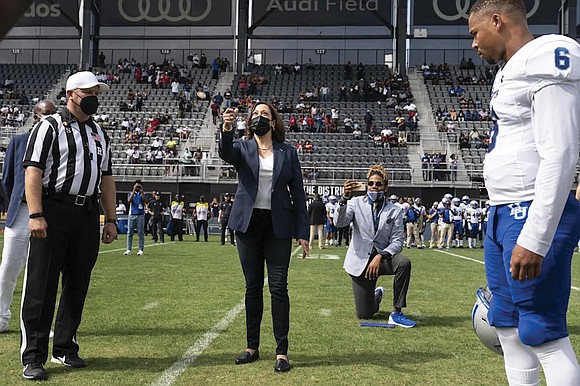 Vice President Kamala Harris, a 1986 graduate of Howard University, opens the Howard-Hampton game with a coin toss, won by her alma mater.

With Vice President Harris presiding over the opening coin toss in which Howard called heads and won, the host Bison lost 48-32 to Hampton University in the first-ever football game played at Audi Field, home of Major League Soccer’s D.C. United.

Before a crowd of 14,577 fans, the game, traditionally known as the “Battle for the Real HU,” also served as the inaugural Truth & Service Classic.

Vice President Harris, who made a surprise appearance—at least to fans, is a 1986 graduate of the historically Black uni- versity in Washington.

Big South affiliate Hampton, now 2-1, has this week off before hosting Norfolk State University on Saturday, Oct. 2, at Armstrong Stadium.