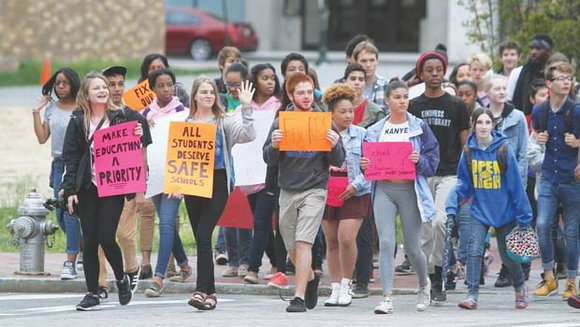 “A patch job can be (initially) done this week,” the 4th District representative said, but she estimated that up to $250,000 would need to be spent to replace the failing section of the roof.

It’s the latest in a growing number of emergency maintenance needs in city schools as students prepare to return to class from summer vacation.

City leaders have mostly responded in a yawn-like fashion to the critical needs that were made public last week.

Assistant Superintendent Thomas E. Kranz documented to the School Board that $35 million in spending was needed to end maintenance problems that potentially threaten the health and safety of the district’s students, teachers and administrative staff.

“These are things I need right now,” he said, though he noted that only $6 million is available, leaving a $29 million shortfall.

This comes as Richmond’s 23,000 students prepare to return to class Tuesday, Sept. 2, mostly in outdated buildings with failing equipment.

The city’s power players have mostly stressed the need for further study from a school-appointed task force, presentation of a new facilities report and more discussion of plans to address the decades-old and long-known maintenance emergency.

“I took that (report from Mr. Kranz) as an update, to make sure everyone’s aware of the potential challenges that we’re facing,” said Schools Superintendent Dana T. Bedden prior to Monday’s School Board meeting.

He only stepped into his new post in January and recently finished assembling a mostly new school leadership team.

“Clearly, we have to work together and develop a plan,” Dr. Bedden stressed.

On Monday, Mayor Dwight C. Jones weighed in at a press conference.

He said he was aware of the maintenance dilemma. He indicated he would be more open to seeking additional funds to perform the emergency fixes if the school system tightened its budget, closed underused schools and improved student academic performance.

Mayor Jones said he’d await a November report from the community task force comprised of architects, engineers and other professionals that is charged with offering solutions to the decades-old problem.

“I agree that we need proper facilities within which to educate our children,” the mayor noted, reading from a four-page statement.

“Fixing our schools has to be defined beyond improving school buildings, and must include improved outcomes,” he added.

He called for a “comprehensive approach” to solve a myriad of challenges facing RPS.

He said attracting more students to the district remains a top priority for him and that improving students’ classroom performance could entice more parents to send their children to city schools.

Some of the additional tax dollars generated by those families could be used to fix more schools, he said.

He said that disparity increases to 500 to 800 students per building in city high schools, compared to the counties.

The mayor direly noted that 30 of 44 city schools are in warning status with their accreditation.

The mayor also pointed out the district’s dismal on-time graduation rate of 76 percent and the dropout rate of 17 percent.

Mayor Jones emphasized that he helped the School Board to gain $6 million from City Council for maintenance of schools prior to this year.

He failed to mention he otherwise proposed to provide $1 million or less each year for maintenance.

“Every maintenance request that we’ve received from the Richmond Public Schools has been fully funded,” he stated.

The mayor said he would not raise taxes to address the problem.

He also indicated he has no plan to redirect the $21.5 million budgeted to build a new Overby-Sheppard Elementary School in the Highland Grove community on North Side to meet the school system’s maintenance needs. The $35 million is just a down payment on the real need that is now estimated to top $100 million.

He did indicate his administration would explore some public-private options and likely would present one or more proposals when he submits his proposed 2015-2016 budget plan next spring.

The mayor, though, wants the school system to right-size or close schools with fewer students than the buildings are designed to hold and move those students to other schools.

“The issue of right-sizing is paramount in order to know where to invest our dollars,” said the mayor in sounding a theme first aired by his predecessor, L. Douglas Wilder.

The mayor said he would try to find the funding for a study of right-sizing requested by Dr. Bedden.

Mr. Kranz said he agreed with the mayor that schools must be more “frugal” with scarce resources.

Ms. Larson said the mayor failed to invite any School Board members to attend his press briefing or give them any advance notice.

Ms. Larson noted the severity of the maintenance problems prior to Monday night’s board meeting.

“I think it’s a concern for everybody,” said Ms. Larson, who led the meeting in place of vacationing board chairman Donald Coleman, 7th District. Board member Mamie Taylor, 5th District, also was not present.

Ms. Larson conceded the board had not addressed the problem since receiving the alarming report a week earlier.

“We didn’t take any action, and we haven’t asked for any money,” she said. “We need to do something.”

Asked why the board didn’t have the maintenance item listed on its agenda Monday, Ms. Larson said, “I guess it makes for good press to do something tonight, scream and yell about it, but we also have to be efficient with our time and make sure we’re addressing the academic needs of our students and the fiscal needs of our school system. We can’t talk about facilities at every meeting.”

The board did take two actions at the end of the three-hour meeting related to maintenance issues.

First, it moved the John Marshall roof to the top of its priority list of items to repair.

Second, it changed the way it budgets for capital projects. The board voted to no longer mix in money from its maintenance and operations budget to perform capital or major projects that extend the life of a facility.

However, board member Tichi Pinkney Eppes, 9th District, did not offer a resolution, as she earlier indicated she would do, to begin the process of seeking a loan from the Virginia Retirement System.

Mr. Goldman, a political activist, called for seeking a loan from the Virginia Retirement System “the cheapest and fastest way to get the money.”

He first presented the proposal in the Aug. 14-16 edition of the Free Press.

Ms. Pinkney Eppes said she sent the resolution to her board colleagues earlier Monday via email, but did not receive support.

“All the board had to do was pass a resolution to get the process started,” Mr. Goldman said.

“Why are the politicians offering excuse after excuse for not doing anything. There’s been plenty of action about a new stadium, but when it comes to schools, there’s no rush.”

He called the idea that the issue of aging buildings and failing equipment is just being discovered “ludicrous.”

Mr. Goldman said failure to act on the problems was callous.

He accused them of not acting to provide adequate schools that serve mostly black, low-income children.

Ms. Larson said the board intended to spotlight facilities deficiencies by offering City Council members a tour of the crumbling schools Wednesday and again next week.

The only problem with that: Every council member has been aware of the need for the big infusion of cash needed for emergency maintenance needs since at least May 2013.

They were informed then by the School Board that the school system needed $25 million over the next 18 months to replace failing equipment.

Council member Chris A. Hilbert, chair of the health, human services and education committee, said the School Board never requested that kind of money despite the report.

He said he is “willing to work cooperatively to find a solution. There are critical needs for the schools, and this will be an important issue for my committee.”

Council Vice President Ellen F. Robertson said Monday she had asked for more than six years for RPS to provide a three-year academic and facilities study.

“It’s a matter of putting the information we have on the table and making some decisions,” she said.

Mr. Kranz assured parents at Monday’s board meeting that despite his cries a week earlier of a maintenance crisis that all is well at RPS.

“Every school is safe and in good working order,” he said. “We’ll continue to work to make them better.”