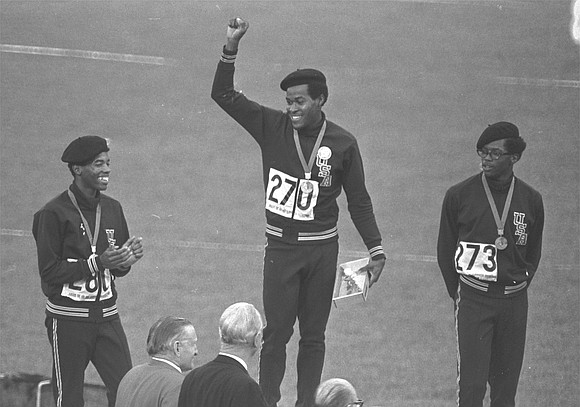 U.S. Olympic team sprinter Lee Evans, center, puts his fist up in a Black Power salute and protest against racism during the medal ceremony at the 1968 Summer Olympics in Mexico City. He and teammates Larry James, left, and Ron Freeman also wore black berets in protest while receiving their medals in the 400-meter race. Evans’ gold medal win in running 400 meters in 43.86 seconds set a record that stood until 1988. AP file photo

Lee Evans, the record-setting sprinter who wore a black beret in a sign of protest at the 1968 Summer Olympics and then went on to a life of humanitarian work in support of social justice, died Wednesday, May 19, 2021, at age 74.

The Evans’ family had started a fundraiser in hopes of bringing him back to the United States from Nigeria, where he coached track, to receive medical care after he suffered a stroke the week before his death.

Evans became the first man to crack 44 seconds in the 400 meters, winning the gold medal at the Mexico City Olympic Games in 43.86. His victory came shortly after his teammates, Tommie Smith and John Carlos, were sent home from the Olympics for rais- ing their fists in a Black Power salute on the medals stand.

In later interviews, Evans said an official warned him not do anything similar. Evans, who briefly considered dropping out of the Olympics after Smith and Carlos were sent home, wore a black beret to show support for the Black Panther Party and other civil rights organizations. He did ultimately raise his fist on the medals stand.

“Lee Evans was one of the greatest athletes and social justice advocates in an era that produced a generation of such courageous, committed and contributing athlete-activists,”

said Harry Edwards, architect of the Olympic Project for Human Rights, of which Evans was a key member.

Like Smith and Carlos, Evans was a college star on the San Jose State University “Speed City” teams. And like his teammates, he earned his platform at the Mexico City Olympic Games with an indelible performance on the track. After running his 43.86 in the 400, Evans anchored the U.S. 1,600-meter relay team to a world record of 2:56.16, with relay teammates Vince Matthews, Larry James and Ron Freeman.

Evans also won five U.S. titles at 400 meters and is a member of both the USATF and U.S. Olympic halls of fame. Many remember him just as much for his post-retirement career as for his achievements on the track.

He coached at Washington, San Jose State and South Alabama, and was director of athletics for the Special Olympics. San Jose State, in its obituary on Evans, said he coached national teams for Qatar, Cameroon and Nigeria. Evans was in Nigeria coaching high school track when he suffered the stroke.

The school said Evans received the 1991 Nelson Mandela Award for those who “stood for the values of equality and friendship and respect of human rights, against apartheid and any form of racism.” He also worked on the Madagascar Project, which helped provide fresh water and self-sustaining farming techniques.