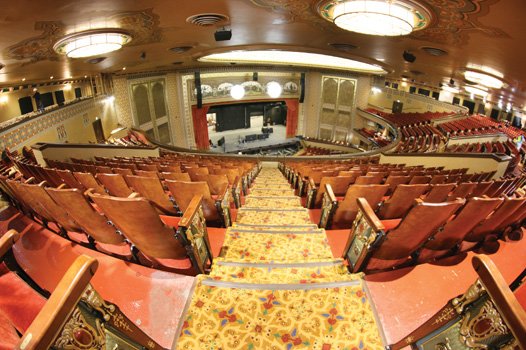 However, his amplified words came through loud and clear, even in the last row of the balcony three stories up and more than 100 feet away from where he sat on the Dominion Stage at the Altria Theater.

What a sound revelation for fans of the cheap seats. At last, it is possible to hear the words and the music without having to buy a pricey ticket at the city-owned venue.

Since 2013, about $50 million has been poured into the building — the largest theater between New York and Atlanta, according to Jay Smith, theater spokesman.

The money has been spent on everything from improved lighting and seating to upgraded wiring and plumbing to restoring the basement ballroom into a grand space that can seat up to 800 people.

Other additions include new marquees at the Laurel Street and Main Street entrances, a new box office and far more restrooms. There are 14 restrooms in the building, with double the number of stalls for women, who long have had to wait in line during intermissions.

However, most of the building’s interior look has been preserved, including the mosaic tile.

One big question mark is whether promises were kept to have 40 percent of the work undertaken by black-owned and minority businesses.

In response to a Free Press query, City Hall disclosed Wednesday afternoon that 22 mostly black-owned companies, largely from the Richmond area, served as subcontractors for the general contractor, Gilbane Christman, a joint venture of two construction companies based in Rhode Island and Michigan.

The statement did not offer specific figures on the contracts to minority-owned companies. “The percentage of work presently stands between 32 percent and 34 percent, but the total dollars paid are not final yet,” Tammy Hawley, the mayor’s press secretary, noted in the statement.

Still, this project goes beyond anything City Hall has ever undertaken to provide tender loving care to this grand theater.

That $50 million price tag was just for construction work, Mr. Smith said. Some work remains to be done, including installation of a new café on the ground floor. The restored ballroom’s kitchen is still being installed and there are finishing touches being applied. Other costs, including design, engineering and legal fees, have boosted the total price to $63 million, of which taxpayers contributed $14 million.

This kind of theater, like a coliseum and convention center, is one of the must-have elements for a big city.

Mayor Dwight C. Jones, whose administration made the upgrades happen and who considers it important to the city’s vitality, is delighted at the result. He said the outcome of the public-private investment means “this iconic theater will continue to be a place where Richmonders and visitors can enjoy world-class performances, concerts and speakers.”

Overall, the investment is nine times the spending that went into the last renovation, a $7 million effort undertaken in 1995. Davis Brothers Construction Co., one of the area’s largest black-owned firms, led that limited renovation.

The theater dates to 1927 and originally was built and owned by the Acca Temple Shrine, a Masonic-related group that developed the Arabian-style venue at a cost of $1.65 million. When it opened, The Mosque featured a 4,600-seat theater, 42 hotel rooms, a gym, pool, three-lane bowling alley and a restaurant.

But the Great Depression collapsed the finances of the private group, and the city picked it up cheaply in 1940 as a place to provide public entertainment.

City Hall often regretted the purchase as the building rarely covered its costs and required annual subsidies. Little money was spent to maintain the building until the 1990s when the city faced a choice — either renovate it or shut it down.

Still, the spending then was far short of what was needed. And by 2000, a task force set up by the city was urging that management be taken out of city hands and turned over to professionals to boost the offerings and improve earnings.

In the years since, that recommendation has become a reality as Richmond made the performing arts a key element of the restoration of Downtown. SMG manages Altria Theater, along with Richmond Coliseum and Richmond CenterStage.

A few years ago, the city joined a nonprofit foundation to restore and expand the Carpenter Center into Richmond’s CenterStage at a cost of more than $70 million. The city even imposed a 1 percent tax on prepared food to provide a funding stream to help pay the debt on the center that replaced a defunct department store. That 1 percent tax pumps between $2.1 million and $2.4 million into that venue each year.

Then it became the turn of the Landmark Theater, which was turned over to the CenterStage to manage.

Much of the money for both projects came from historic tax credits, which the state and federal governments provide for the restoration of historic buildings. Altria Theater and Richmond CenterStage combined raised about $50 million from the sale of tax credits, without which neither project could have been accomplished.