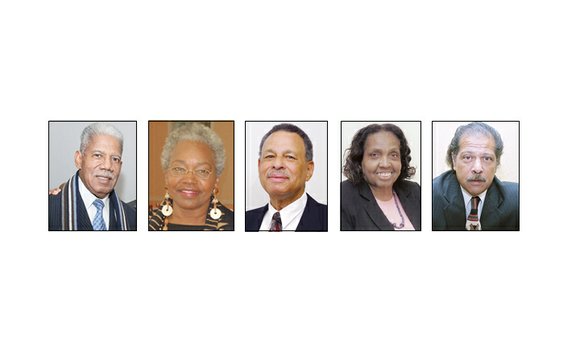 African-Americans took control of the levers of city political power almost 38 years ago and changed Richmond.

It was 1977, and for the first time in the city’s history, five of the nine members of City Council were African-Americans. And as a result, the new majority was able to elect one member, Henry L. Marsh III, as Richmond’s first African-American mayor since the city’s founding in 1782.

Mayor Dwight C. Jones wants to celebrate that historic moment that he believes paved the way for him. Earlier this month, he won unanimous support from City Council to create commemorative street signs that will go on the blocks where the homes stand of Mr. Marsh and the four other African-American members of City Council at the time — Willie J. Dell, Walter T. Kenney, the late Claudette Black McDaniel and Henry W. “Chuck” Richardson.

Mayor Jones plans to hold a special reception next week to celebrate the people who comprised the first African-American majority on council.

Open to the public, the event is scheduled to start 7 p.m. Wednesday, Feb. 25, at The Hippodrome Theater on Second Street in Jackson Ward. The celebration will follow a private reception for the honorees and their invited guests.

“We thought there should be a special event held for the honorees rather than the street signs just being installed,” said Tammy Hawley, the mayor’s press secretary.

The Hippodrome holds about 670 people, according to its website. But only about 400 people comfortably fit in the space when the mayor held his 2011 State of the City address there.

Asked why the mayor had his staff rent an expensive space with tax dollars rather than holding the event at City Hall, Ms. Hawley responded that the city was “just trying to have a nice event for the honorees.”

“We felt The Hippodrome was an appropriate venue,” she said.

This spring, the mayor plans to lead another public ceremony to formally rename the Manchester Courthouse on South Side for Mr. Marsh and his late brother, Harold Marsh. Mr. Marsh expects that to happen in late April.

Mr. Marsh has been a fixture on the political scene since the 1960s. He spent 25 years on City Council and then served 23 years representing the area in the state Senate. He now serves on the state Alcoholic Beverage Control Board.

Mr. Marsh said he is pleased that the city plans to hold the Hippodrome event to call attention to all of the members of the first majority African-American council.

But Mr. Marsh said he has been given too much credit.

“It’s all been Henry did this, and Henry did that, but it’s not so. I was able to be the spokesperson” for the majority, he said.

He said that he would have been stymied if the four other members did not vote with him. He said he couldn’t have been elected mayor without them.

“And there was a lot of pressure on them not to vote for me,” he said. “Having five members is what gave us influence, what gave us power. It was not a one-person show.”